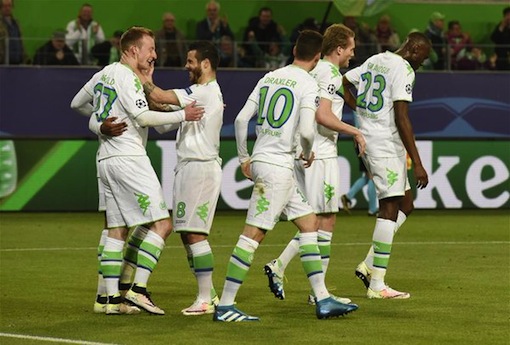 Wolfsburg players celebrate after scoring against Real Madrid in Germany

Wolfsburg stunned an out-of-sorts Real Madrid by comfortably beating the Spanish team in the first leg of their Champions League quarter-final tie.

The hosts were awarded a controversial penalty when Casemiro was deemed to have fouled Andre Schurrle, and Ricardo Rodriguez converted from the spot.

Real were poor defensively and a rapid attack ended with Bruno Henrique setting up Max Arnold for the second.

The visitors created little, but should have been awarded a penalty early on.

Defeat was Real’s first in a Champions League quarter-final since 2004, and leaves the 10-time winners needing a vastly improved performance in the return leg at the Bernabeu next Tuesday.

The Spaniards last overturned a two-goal first-leg deficit in European competition in 1987, when they beat Red Star Belgrade in the quarter-finals of the European Cup.

Wolfsburg manager Dieter Hecking said his players would try to “annoy” Real, and the questionable penalty awarded by referee Gianluca Rocchi would certainly have irked the Spaniards.

But despite the fortuitous circumstances in which they took the lead, the quarter-final debutants deserved their first-leg advantage and could have scored more so awful were Real in defence.

Marcelo and Sergio Ramos, in particular, were to blame for the second goal, which Arnold side-footed home from six yards.

Moments earlier, Arnold had nicked the ball from Cristiano Ronaldo inside his own half and was allowed to surge 60 yards unchallenged before nearly putting Schurrle through.

After the break, Schurrle should have done better when through on goal, while substitute Max Kruse forced a fine save from Keylor Navas in the dying minutes.

Real boss Zinedine Zidane said his team would treat the match “like a final” but his men were a shadow of the side that beat Barcelona in El Clasico at the weekend.

Zidane made just one change to the team that ended Barca’s 39-match unbeaten run, yet they could not reproduce Saturday’s performance.

Gareth Bale, playing on the left wing, was their most potent player and should have been awarded a penalty when the score was goalless. Ronaldo – making his 124th Champions League appearance – lacked clout, while Karim Benzema hobbled off early in the first half.

It was not a result many would have predicted beforehand, with Wolfsburg losing 3-0 to Bayer Leverkusen – their third game without a win in the Bundesliga, at the weekend.

Seven points adrift of fourth-placed Borussia Monchengladbach, they are in danger of missing out on next season’s Champions League if they do not win the competition, yet in Julian Draxler and Schurrle the Germans proved they have players who can shine on such a stage.