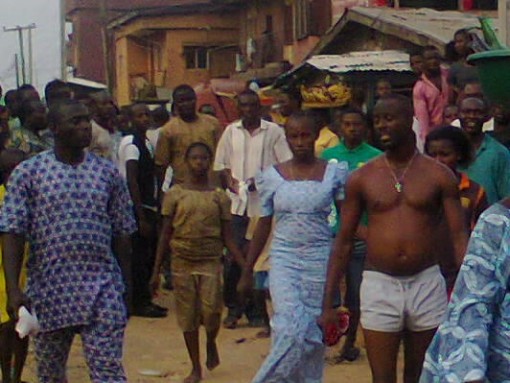 SHOW OF SHAME: Inspector Ibrahim Odufarasin (bare chested and wearing only shorts) and his Onyabo Boys on Church Street in Ijora Badia

The residents of Church Street in Ijora Badia have protested over the release of a police Inspector who allegedly shot three residents and injured others during a naming ceremony in the area in Lagos State, Western Nigeria.
Inspector Ibrahim Odufarasin was arrested after he shot three residents, Rasaq Ganiyu, Ade Ogunbaju and Bayo Iwaloko, during the naming ceremony.
He allegedly disrupted the event with his group popularly known as Onyabo, said to be suspected to cultists because the celebrant did not consult him to get approval.
According to the residents while the ceremony was going on, he stormed the place and disrupted the event with his boys.
An attempt by the youths in the area to resist him led to sporadic shooting and in the process many of them sustained injuries.
Following the incident, he was arrested and the matter was transferred to SCID Panti for investigation.
Also the guns and other weapons used during the attack were confiscated from him and his group.
However, on Wednesday, the police freed him without investigating the matter despite the fact the victims were still receiving treatment at various hospitals.
When the residents sight him in the area, it sparked off protest and they alleged that the police were protecting him and allowed him to commit all sort of crimes in the area.
The residents told our reporter that Insppector Odufarasin who is attached to IG Anti-pipeline vandalism team and lived in the area reportedly formed a group in the area called Onyabo Boys who are terrorizing the residents daily.
This was confirmed by a police source in the area who said they (group) are part of community policing set up to combat crimes in the area.
According to a resident simply known as Bola (surname withheld) the group operates in the area with guns, knives, charms and other weapons in the area, especially Church Street and it axis.
He alleged that the group intimidates, harasses, extorts money and takes their wives and that the group commits the atrocities in support of the police in the area.
When our reporter visited the area, Odufarasin was sighted with his group moving round the area singing and dancing and announcing the return of Odufarasin and his Onyabo group in the area.
This caused tension in the area and our reporter immediately contacted the DPO, Mr S. K. Ayeni who promised to beef up security in the area.
P.M.NEWS gathered that at the SCID Panti, ASP Fatai Sadiku was detailed to investigate Odufarasin.
However, he was ordered to release him by higher authority.
When our reporter contacted the Lagos State Police Command Public Relations Officer, SP Dolapo Badmos over the matter, she did not pick her calls.