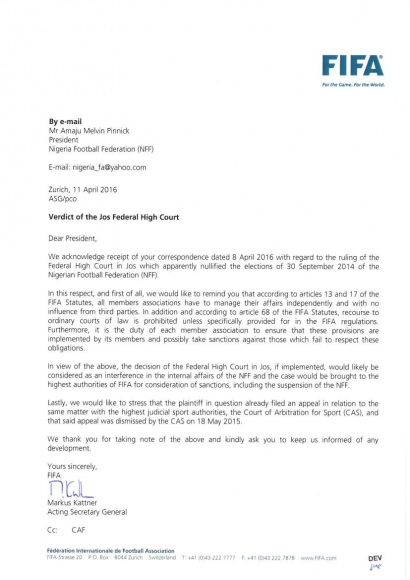 The world football governing, FIFA has reacted to the ruling of Jos High Court, saying the ruling cannot hold water on Nigeria Football Federation, NFF and any action to unseat Amaju Pinnick’s led board would attract a possible ban.

FIFA wrote in a letter addressed to Amaju Pinnick, the embattled NFF boss on Monday that Article 13 and 17 of FIFA are cleared that there should not be interference whatsoever with the running of football in the country.

“All members associations have to manage their affairs independently and with no influence from a third party. The decision of the Federal High Court in Jos if implemented would amount to interference and the case would be brought to the highest authority of the FIFA for consideration for sanctions, including the suspension of NFF,” FIFA’s acting Secretary General, Markus Kathner wrote.

FIFA emphasised that Chris Giwa has taken his case as far the Arbitration of Sports, CAS, which he lost.