Pray for another Ijaw leader like Alamieyeseigha - Jonathan, Dickson urge 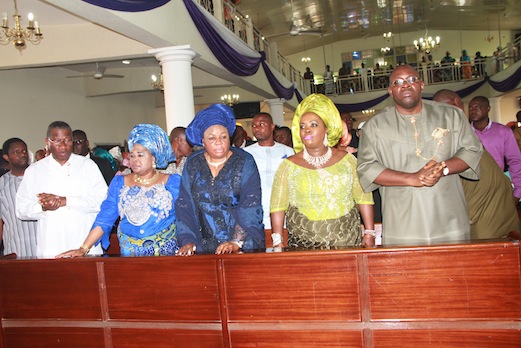 Bayelsa State Governor, Hon. Seriake Dickson and the immediate past president of Nigeria, Dr. Goodluck Jonathan have asked the Ijaws to pray for God to raise another leader that would fill the vacuum created by the passage of their Governor General, Chief Diepreye Alamieyeseigha.

They made the remark at the thanksgiving service in honour of the first civilian governor of the state, Chief Diepreye Alamieyeseigha at the St. Peters Anglican Church in Yenagoa.

Dickson pointed out that a major void has been created following the passage of the former governor and stressed the need for leaders to do more by emulating the ideals of Chief Alamieyeseigha.

The governor noted that, though the departed leader had some adversaries, it was a general belief that Chief Alamieyeseigha was large-hearted and fought for the common interest of the Ijaws.

Expressing gratitude to all who graced the funeral ceremonies, the Governor emphasized that irrespective of differences; the major concern should be the interest of the people.

He said for the state to make progress, people should imbibe the culture of respect for constituted authority and shun the pull-him -down syndrome for leaders, noting that, the state government has institutionalized support and honour for deserving leaders of the state and the Ijaw nation.

Eulogizing the qualities of the former governor, Dr. Goodluck Jonathan described Alamieyeseigha as a visionary leader, whose lifestyle reflected his names, Solomon and Peter depicting peace and the rock, noting that, whoever takes over the baton of leadership for the Ijaw nation and the Niger Delta should not be discriminatory, but engender social transformation.

Highlighting the attributes of a true leader, the former president said, it requires commitment and sacrifice at all times, which Chief Alamieyeseigha displayed in his lifetime to the detriment of his own life.

He also described the departed leader as God-fearing, which was evident in the building of the St. Peters Anglican Church as a befitting place of worship and adopted it as the state church, as well as initiated the idea of dedicating Bayelsa to God annually.

In a sermon with the theme, “He That Has An Ear, Let Him Hear What The Spirit Of God Is Saying To The Churches,” Bishop of the Niger Delta West Diocese of the Anglican Communion, Right Reverend Emmanuel Oko-Jaja extolled the character of Chief Alamieyeseigha, pointing out that, the former governor toiled and bequeathed worthy legacies.

Urging the people of the state to live their lives according to the dictates of God, Right Reverend Oko Jaja prayed God to grant the Alamieyeseigha family and the Ijaw nation the fortitude to bear the irreparable loss.