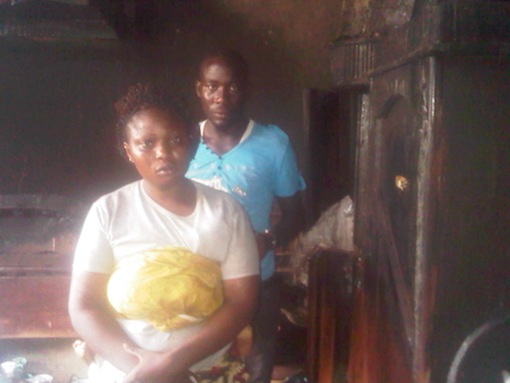 Shakiru and his wife, Bosah

A landlady, Mrs Nike Azeez shocked the residents of Ijegun community in Lagos State western Nigeria, on Tuesday morning after she carried some petrol and set her tenant’s apartment ablaze, destroying properties inside the apartment.

It took the intervention of the residents to quench the fire from spreading to other apartments and the entire building.

P.M.NEWS gathered that the woman did so in order to forcefully eject the tenant who she had a disagreement with.

The incident happened at about 9:00 am on Tuesday at number 8 Two brothers street in Ijegun where the landlady lives with the tenant.

According to residents, Mrs Nike Azeez reportedly brought some petrol and broke into Adeleke Shakiru’s room and parlour apartment through his window.

She reportedly spread the petrol on a foam and other properties in the house and lit matches to set the place ablaze.

After the dastard act, she fled and her husband Jamin Azeez and members of the family fled too due to the fear of her action.

According to the victim, Shakiru, he rented the apartment two years ago and was using a small generator like any other tenant living at the building.

He said one morning, Nike’s husband, Jamiu Azeez told him to stop using the generator which he kept outside the premises.

Shakiru then quizzed Jamiu, asking him why he should stop using his generator, while he was engaging Jamiu, Nike intervened and said whatever the landlord directed must complied with or that he moves out of the house.

He said he ignored them and powered his generator to charge his phones.

He said from there, Nike started making trouble and threatening his family.

He said at a time she used a digger to remove his doors and windows which was reported to the police at Ishero Oshun division.

He said through the intervention of the elders in the area, he withdrew the matter and replaced what she damaged.

On the day the incident happened, he said he was at his place of work when his wife called and informed him that Nike has set their apartment ablaze.

He said when he rushed home, everything was destroyed.

Shakiru’s wife, Bosah, then told our reporter that her husband went to work and Nike came out and was dragging her son, Adam, insisting that she would throw him into the water well.

She said it took the intervention of the neighbours who forcefully prevented her from doing so.

She said while she was still outside with other neighbours, Nike went into her apartment, carried some petrol and went through the back window to burn the house.

She said that it was one of the neigbours who attempted to prevent her that raised alarm. She said the neighbour then rushed inside their room to carry her son.

A team of police officers from Isheri Oshun have visited the place for report and investigation.

P.M.NEWS gathered the both the Nike, Jamiu and their children fled after discovering the gravity of the offence.