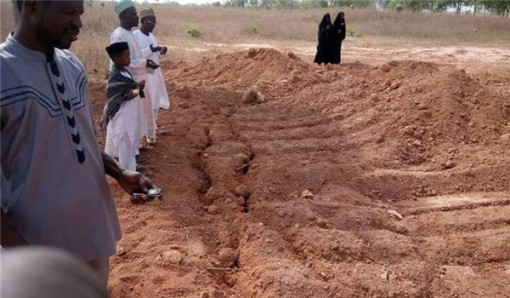 The grave where killed Shiite Muslims are believed to be buried 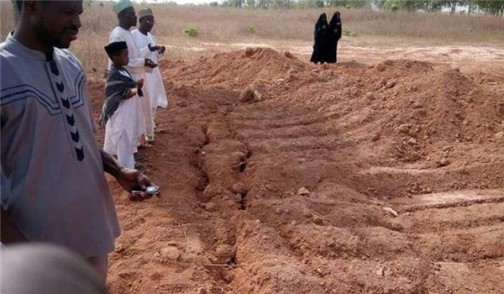 Claims by a Kaduna state official that Nigeria’s military secretly buried 347 people after clashes with members of a minority Shi’ite Muslim sect should be investigated and anyone suspected of wrongdoing put on trial, Amnesty International said on Tuesday.

The official on Monday told an inquiry into the December clashes in the northern state of Kaduna that the corpses were taken from an army depot and buried in mass graves.

The army has previously said the Islamic Movement in Nigeria had tried to assassinate its chief of staff, Lieutenant General Tukur Buratai, when members of the sect blocked his convoy in the northern city of Zaria in December. The following day the army said it had raided several buildings connected to the sect.

A Nigerian army spokesman contacted by Reuters declined to comment on the mass burial allegations. In January, the army chief of staff told the inquiry that his soldiers had acted appropriately in the raid.

Balarabe Lawal, secretary to the state government in Kaduna, told the inquiry that the bodies in the secret mass burials were those of sect members.

Amnesty International Nigeria said the “revelation by the Kaduna State government that hundreds of Shi’ites were gunned down and dumped in mass graves is an important first step to bringing all those suspected of criminal responsibility for this atrocity to trial”.

“It is now imperative that the mass grave sites are protected in order that a full independent forensic investigation can begin,” it said in a statement.

The Shi’ite sect has previously said up to 1,000 of its members had been killed. The inquiry has the power to impose fines and payment of compensation.

Most of the tens of millions of Muslims in Nigeria are Sunni, including Boko Haram militants who have killed thousands in bombings and shootings, mainly in the northeast, since 2009.

Africa’s most populous nation has around 180 million people, including several thousand Shi’ite Muslims whose movement was inspired by the 1979 Islamic Revolution in Shi’i (te Iran.