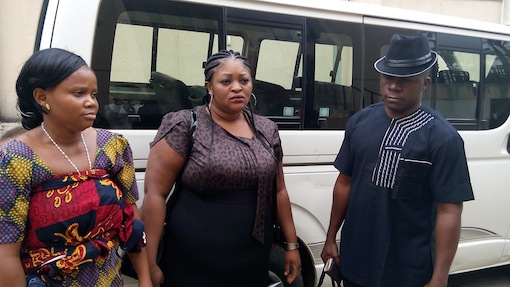 The Economic and Financial Crimes Commission, EFCC, on Thursday, April 28, 2016, arraigned the trio of Patience Owerema, Nwakoba N.Francisca and Okafor Kingsley before Justice Binta Nyako of the Federal High Court sitting in Abuja on a four-count charge bordering on conspiracy, abuse of office, forgery, impersonation and diversion of funds to the tune of N3, 766, 160.00 (three million, seven hundred and sixty-six thousand, one hundred and sixty naira).

The accused persons allegedly conspired among themselves to divert the sum of N3, 766, 160.00, which was the terminal benefit of the late Udemba Clement, a former employee of NITEL/MTEL and father to the petitioner, Udemba Emmanuel.

Following the death of his father, the petitioner had made efforts to collect the final entitlement\terminal benefits of his father to no avail.

The petitioner, however, found out that the money had been paid into a certain account opened by the accused persons in the name of his deceased father.

One of the chargse reads: “That you, Patience Owerema, Nwokobia N. Francisca, Okafor Kingsley and Adegoke Adeniyi (now at large) on or about 8th April, 2011 at Abuja ,within the jurisdiction of this honourable court, did convert the sum of N 3,766,160.00(Three Million, Seven Hundred and Sixty- Naira) which sum you knew represented the proceeds of crime transferred from Zenith Bank Plc account into the account of one purported “Udemba Clement” domiciled at Oceanic Bank Plc (now Ecobank) with account No.3120001011636 with the aim of disguising the origin of the money and thereby committed an offence contrary to Section 15(2) of Money Laundering (Prohibition) Act, 2011 as amended and punishable under Section 15(3) of the same Act.

The accused persons pleaded not guilty to the charges when they were read to them.

In view of their pleas, the prosecution counsel, Sadiq Hussaini, asked the court for a trial date.

Counsels to the defendants prayed the court to grant their clients bail, but were refused.

However, Justice Nyako granted the second defendant, Francisca, a nursing mother, bail on compassionate grounds and ordered her counsel to file her bail application within one week.

Both the first and third accused persons were, however, ordered to be remanded in Kuje and Suleja Prisons, respectively.

The case has been adjourned to June 14, 2016 for commencement of trial.