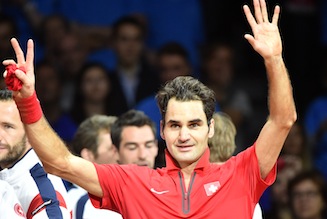 Roger Federer has withdrawn from this week’s Madrid Open tournament because of a back injury.
Federer, 34, said he had sustained the problem during practice on Saturday and had pulled out as a precaution.
The world number three hopes to play in the Masters event in Rome from 9-15 May, the last major tournament before the French Open.
Federer, Madrid champion in 2012, returned to action in Monte Carlo in April following knee surgery.
“I arrived and I was OK,” said Federer. “Then I practiced on Saturday and hurt my back a little bit and stopped early. I was supposed to practice for two hours – I had to stop after an hour and 15 minutes.
“At this point I don’t want to take more chances as I know I’m not going to be fully ready for Wednesday. I would rather play it safe and rest up now and get ready for Rome.