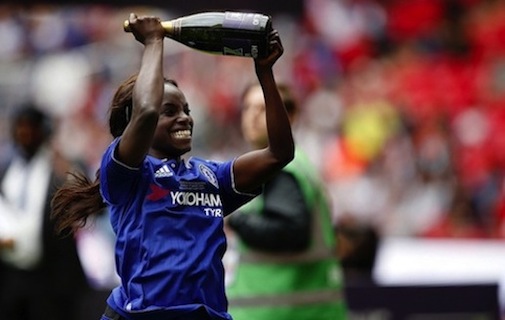 The 46th Women’s FA Cup Final between Arsenal and Chelsea is set to see a competition-record crowd venture down Wembley Way, to watch two sides which include 12 senior England internationals.

Players such as striker Eniola Aluko – the star of Chelsea’s win over Notts County in last year’s final – and legendary Arsenal forward Kelly Smith may be familiar names, but the domestic game in England now boasts more overseas stars than ever before.

So who are the players to look out for on Saturday?

Manager Emma Hayes has called her Chelsea’s ‘little magician’ and South Korea forward Ji So-Yun certainly has the skill to conjure up goals for the Blues.

Having netted the only goal in last year’s final and in Chelsea’s 2015 semi-final win over Manchester City, Ji’s goals were crucial to her side winning their first major trophy.

And the 2015 PFA Women’s Player of the Year has been at it again in the cup already this year, as her precise free-kick saved Chelsea in the semi-finals against City in April, sending the match into extra-time, when they had looked destined for a frustrating exit.

Unquestionably one of the most skilful female players in the world, Ji has the natural ability to steal the limelight at Wembley and be a match-winner once again.

Nigeria forward Asisat Oshoala, who has 11 goals in 17 international appearances, could be one of Arsenal’s wildcard picks on Saturday.

The 2015 BBC Women’s Footballer of the Year, who finished as the top scorer at the Women’s Under-20 World Cup in 2014, joined the Gunners from Liverpool in March and scored on her league debut against Reading.

Her pace can hurt any team, but it is not clear whether she will start for Pedro Martinez Losa’s side, having made three starts and three substitute appearances so far this season.

The midfield battle of the Lionesses

Having won nine FA Cups already in her career, Chelsea’s Katie Chapman will be bidding to add yet another medal to her illustrious CV, and this time she is up against her former club.

But she is also facing her England team-mate, and the Lionesses’ most-capped player, Fara Williams.

Like Oshoala, Williams moved from Liverpool this winter, leaving a club with whom she had won back-to-back league titles in 2013 and 2014.

The two veterans of the English game will go head-to-head for control of the midfield at Wembley – but could another, younger, Lioness take the headlines instead?

A teenager with nerves of steel

If you’re looking for a player who has shown she can handle serious pressure, look no further than Arsenal’s 19-year-old Leah Williamson.

Last April, the versatile teenager hit the headlines in the most unusual of circumstances, playing for the England Under-19 side.

She had to take a nerve-wracking penalty kick, five days on from when it was originally awarded, after an unprecedented intervention by Uefa.