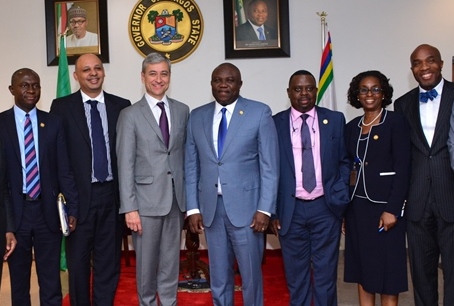 Lagos State Governor, Mr. Akinwunmi Ambode on Monday said that the State Government would explore areas of cooperation with Microsoft International especially in the area of improving security in the State as well as the justice sector reforms so as to boost service delivery to the people.

Governor Ambode who spoke when the President of Microsoft International, Mr. Jean-Philippe Courtois paid him a courtesy visit at the Lagos House, Alausa, Ikeja said his administration would take full advantage of the existing cooperation between the State Government and Microsoft and utilize technology to engender more efficient and prompt service delivery to Lagosians.

He said, “I want to let you know that the area that you have spoken about are areas that are of interest to this administration. I am very high on wanting to see major issues that relate to security and judicial sector reforms and again beyond the fact that when you put a whole lot of things in place.

“We are also aware that technology will drive us to the point where we really want to make Lagos a globally competitive city and so for Microsoft to come to partner with us is a thing of joy, I want to commend you for making this visit for also opening up to our officials here, that whatever it is that is in the scale of business here that we have taken, this is the time now to take advantage of this particular visit in the areas of judicial sector reforms, safety and other areas of delivering services to our people in a more faster and efficient way.”

He said the visit by the Microsoft boss and his team was significant, adding that it had gone a long way to show that Nigeria is still a good location for business and enterprise with Lagos at the heart of it.

“Like we said, we need to scale up this relationship and I know that your coming personally is a pointer in that direction. I want to give our commitment to you that whatever it is that we can do together, we would do it, and we would improve on it and also make sure that we deliver it on time so that more people can get our services in a better way and we can become more efficient and we can make the city a more livable city and its only technology that can drive that,” Governor Ambode said.

Earlier, Mr. Courtois said he was in Lagos to improve on the existing relationship with the State Government as well as open up other areas for stronger cooperation in the future in several sectors.

He listed areas including citizens’ engagement, efficiency and transparency across the Ministries Departments and Agencies, tax collection, judicial as well as security reforms.

“I know that you are someone very eager to get the best equipment for police and the people in charge of basically safety, this is one area I would like us to share some best practices we have across the world including the US, Brazil, where we are doing all the work to ensure that people coming for the 2016 Olympics do not worry about security and I think that there is a lot we can share with a very large city like Lagos and hopefully help you achieve some of your goals.

“I want to thank you and your team for the partnership and I want you to really get the confirmation at my level that the Company is very committed to support and help you, lending some of those innovations with your organisation,” the Microsoft President said.