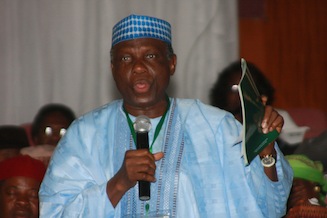 The Board of Trustees (BOT) of Peoples Democratic Party (PDP) has expressed support for the party’s National Working Committee (NWC) to continue with the May 21 national convention in spite of all reservations.

Chief Ojo Maduekwe, the newly elected Secretary of PDP BOT, made the position known in Abuja on Monday while briefing newsmen on the resolutions of the committee’s meeting.

Maduekwe said that the decision was made at the BOT’s meeting in Abuja on Monday with a view to make PDP stronger.

“In spite of the well-articulated reservations by well-respected and articulate elders and members that the convention should not go ahead, the BOT has decided to support the NWC that our national convention should hold on May 21.

“Secondly, that all the grievances that have been well articulated by well-meaning elders and interest groups would be clearly look into in the process of party reconciliation to see how we can carry everybody along.”

Maduekwe said that the grievances to be looked into would be those that were aimed to make the party stronger and not to pull it down.

He added that the party would look into states that encountered problems in their congresses and make amendment.

Maduekwe said that the committee also resolved to urge the National Executive Committee to make a resolution at the convention that the party’s 2019 presidential candidate should come from the north.

“Part of our resolution is also that the review of the party constitution should be suspended,” he added.

Maduekwe said that the party’s mid-term convention had also been scheduled for 2018.

“When that happens the position of chairmanship will automatically shift to the south in accordance with PDP constitution.”

Answering questions, Prof. Jerry Gana, a member of the BOT, made clarification on an allegation that he obtained N500 million from a bank in the name of the party.

Gana said that the money was obtained from the bank by the Fund- Raising Committee for 2015 general elections as the party was unable to finance its activities and the fund-raising dinner.

He said that an account was opened for the money of which the party financial secretary and treasurer were signatories.

He said that the expectation was that the party would pay back the loan from the generated fund.

Gana said that the matter was already in court since the party refused to pay.

Senator Walid Jubrin was elected as the substantive chairman of the BOT at the meeting.