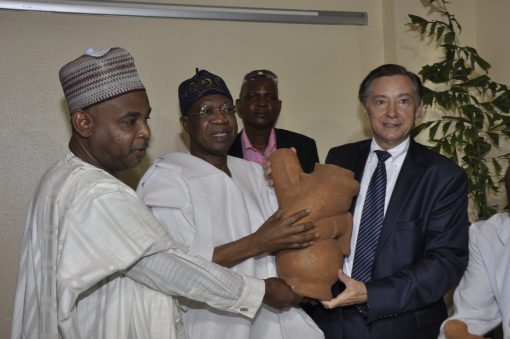 French Ambassador to Nigeria, Mr. Denys Gauer presenting the Nok
Terracotta to the Minister of Information and Culture, Alhaji Lai
Mohammed and the Director General, National Commission for Museums and
Monuments, Yusuf Abdallah, at the 2016 International Museums Day
Celebration in Abuja on Wednesday.

France has officially presented to Nigeria the Nok Terracotta that was repatriated after it was intercepted in France while in transit from Togo to the United States in 2008.

French Ambassador to Nigeria Denys Gauer officially presented the
artifact, a Terracotta figurative sculpture, to the Minister of
Information and Culture, Alhaji Lai Mohammed, at a ceremony to mark
the 2016 International Museum Day in Abuja on Wednesday.

In his address, the Minister thanked the French Government for
demonstrating the will to fight illegal trafficking of cultural
artifacts and urged other countries to emulate France.

“I will like to thank the French Ambassador specially for his
country’s show of support in our fight against illicit trafficking of cultural goods and their untiring efforts at restitution and return of such items. I wish to recommend this ‘French Model’ to other countries,” he said.

Alhaji Mohammed re-emphasised the determination of this administration to elevate culture and tourism to the mainstream of the economy in its quest to diversify the economy, create wealth and generate employment.

Speaking to the theme of the 2016 International Museum Day, which is ‘Museums And Cultural Landscapes’, he said the Administration places high premium on the development of the nation’s cultural sites and their utilization as veritable tourism products.

‘’We are positive that in our quest for the diversification of our
economic base, this section will provide the needed instrument to
actualize that goal,” The Minister said.

In his remarks, the French Ambassador said the presentation of the Nok Terracotta was in line with the International Law and within the framework of the 1970 UNESCO Convention aimed at preventing the
illicit import and export of ownership of cultural properties, which was ratified by both France and Nigeria.

He said the gesture was an illustration of the French policy to fight illegal trade in cultural goods.

Ambassador Gauer said the artifact was intercepted in France as it was being taken to the United States on Oct. 22nd, 2008.

The Nok culture appeared in Nigeria around 1000 B.C. and later
vanished under unknown circumstances around 500 AD. It is the earliest producer of life-sized Terracotta in sub-Saharan Africa.