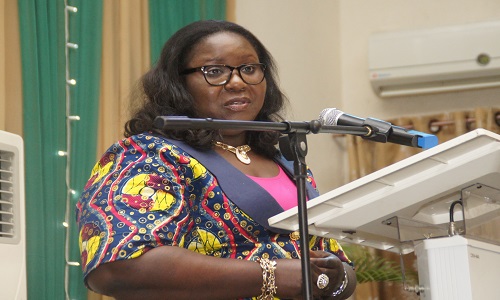 The acting Managing Director of Niger Delta Development Commission (NDDC) Mrs. Ibim Semenitari has described the 2016 budget as a people-oriented document with a clear agenda for the development of all parts of the country.

Semenitari, said this when members of the Non-Indigene Chapter of the All Progressives Congress, APC, in Rivers State, paid her a courtesy visit at the NDDC headquarters in Port Harcourt.

The group was led by its coordinator, Chief Uchenna Okokoba.

The NDDC Chief Executive Officer said that the budget was grounded on policies and programmes meant to help the people of Nigeria, as it was tailored to ensure a better life for the people. She stated that the Federal Government had, through the budget, demonstrated its passion for delivering the dividends of democracy to the people.

Mrs Semenitari praised President Muhammadu Buhari as a man with foresight and progressive ideals. She said: “Mr President has directed us to ensure that life is better for everyone; to build infrastructure that will support businesses to ensure that development is delivered to the smallest communities in the Niger Delta region. That is Mr President’s mandate to us at the NDDC and we are determined to follow that mandate to a conclusive end.”

She commended the APC group for their resilience in “the struggle to wrest the country from the fangs of those who tried to destroy it.” She also underlined the important role they played in holding the various units together at the local levels and urged them not to relent but to continue to support the government in carrying the communities along.

Mrs. Semenitari charged members of the group to continue to support peace in the various local government areas of Rivers State. She noted: “Nothing can be gained by fighting and violence. There is nobody whose life is hanging on the tree. Nobody gives life and nobody should take life. The Holy Book teaches us that anyone who lives by the sword dies by the sword and you cannot shed blood and expect to go scot free.”
“Whatever a man sows, that is what he must reap. So, you must encourage your supporters not to engage in violence. You should teach them not to be involved in acts of violence and criminality because it does not pay.”

The NDDC boss gave plaudits to the leadership of Rt. Hon Rotimi Amaechi, the former governor of Rivers State, noting that he ensured that every Nigerian in the state took it as their home because he believed in the oneness of country.

“He understood that we are greater together. He made it a habit to ensure that whoever lived and worked in Rivers State was comfortable,” Mrs Semenitari said.

The Secretary-General of the Non-Indigene Chapter of the APC, Alhaji Yusuf Tanko, said that the APC family would remain grateful to President Buhari for appointing Mrs Semenitari as the Acting Managing Director of the NDDC.

He said that her achievements since taking over the reins of leadership in the Commission had shown that “what a man can do, a women can do better.”

Alhaji Tanko urged the NDDC to support the efforts of the group in promoting peace and building a cohesive society for all Nigerians.
The spokesman of the APC group, Chief Calistus Nwachukwu, explained the political pressure group had been at the forefront in protecting the political interests of its members and working for the unity of Nigerians from all parts of the country.

“Our group has always been intact and we are not inclined to defections because we practice an enlightened brand of politics that does not have room for political prostitution. We take our stand based on ideology,” he said.