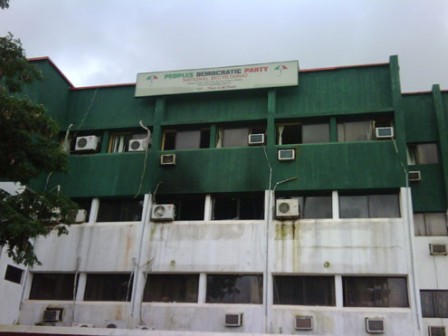 The security operatives are preventing the opposition party members from getting into their headquarters.

One of the security men, who spoke on condition of anonymity, said they were directed to seal off the premises.

He did not, however, say who gave the directive to seal the PDP headquarters or the reason behind their action.

The development, however, may be connected with the ongoing leadership crisis in the PDP.

On Saturday, the party removed its National Chairman, Senator Ali Modu Sheriff and set up a Caretaker Committee.

His removal came on the same day the party had scheduled to hold a national convention.

The Caretaker Committee headed by Senator Ahmed Makarfi, a former Governor of Kaduna State, was mandated to elect a new National Working Committee for the party within three months.

Other members of the committee are;

After he was removed, Senator Sheriff said “the PDP Convention stands cancelled owing to court injunctions” and called the exercise of Saturday a ‘charade and illegal’