Wike to Army Chiefs: We will help you fish out militants 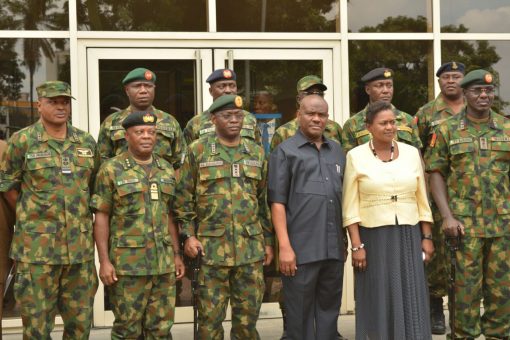 Governor Nyesom Wike of Rivers state has declared that nobody will be shielded from the military operations against militants sabotaging the nation’s economy.

He stated that all Niger Delta governors opposed the use of violence to settle grievances, pointing out, that the governors are billed to meet with the Vice President on 7 June 2016 to discuss and proffer solutions to the security situation in the region.

Speaking on Monday at the Government House, Port Harcourt when he received the country’s military high command led by the Chief of Defence Staff, General Abayomi Gabriel Olonisakin, Governor Wike said: “What’s happening affects our state revenue. We shall help the military to fish out militants blowing up oil pipelines in the region ”

The governor said that the State Government is worried about the resurgence of militancy in the Niger-Delta as it negatively affects development in the area.

“There are ways to channel grievances and it is wrong to do what will negatively affect the people of the region”.

He assured the military high command that the government and people of Rivers State will support efforts to secure the area.

While commending the military for the sacrifice they have made in providing security in most parts of the state, he urged them to work towards improving security in Ahoada East, Ahoada West, Abua/Odual and Ogba/Egbema/Ndoni Local Government Areas of the state.

Earlier, the Chief of Defence Staff, General Abayomi Gabriel Olonisakin said the recent resurgence of militancy in the Niger-Delta is of serious concern to the military.

“Recent activities of the militants have led to the sabotage of oil and gas infrastructure”, he said.

He said economy of the nation is threatened by the resurgent militancy, hence the need to stop the insecurity in the region.

General Olonisakin urged the Rivers State Governor to reach out to his colleagues in the Niger Delta to resolve the conflicts in the area.

He said that the military high command was in the region to interface with the leadership of Operation Pulio Shield and other service commanders on how to put an end to criminality in the region and protect the nation’s economy from total collapse.