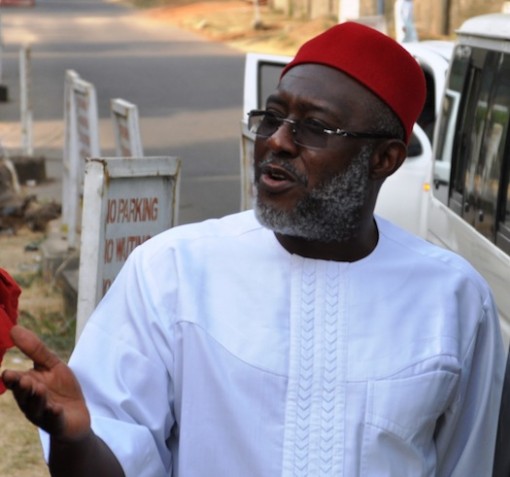 The trial, which is before Justice Okon Abang of the Federal High Court was adjourned abruptly for the second time in two weeks following Metuh’s ill health.

At the resumed hearing yesterday, Counsel to Metuh, Mr. Onyechi Ikpeazu (SAN), informed the Court that Metuh could not make it to the court as he has been placed on bed rest.

To buttress his point, Onyechi presented a letter signed by a consultant neurosurgeon at the National Hospital, Abuja, Dr. O.O Oyeyele, placing Metuh on bed rest.

According to The Guardian report, his Counsel, prayed the court to adjourn the matter to enable him adequate time to recover and stand his trial.

He held that it was proper for the court to adjourn the matter as the trial cannot proceed without the presence of the accused person.

For the Prosecution Counsel, Sylvanus Tahir, although the application did not meet the provisions of Section 266 (a)(b) of the Administration of Criminal Justice Act (ACJA) Which provide that an accused must be present in court to stand his trial, he however said he was not opposing the application since it bothered on the health of the defendant.

He subsequently urged the court to grant Metuh an adjournment to enable him to have adequate rest.

The trial Judge, Justice Abang in a short ruling, held that even though the doctor’s report was not helpful to the court because it does not specify the duration of the bed rest, it has, however, accord the defendant a good reason to be absent in court.

“The medical report issued by Dr. O.O Oleyele, a consultant neurosurgeon gave a good reason for the defendant to be absent in court today.

“However, the medical report is not helpful to the court with regards to the duration of the bed rest. The doctor ought to have provided the period for the sufficient and adequate bed rest of the defendant.

“I have been wondering if the omission in the report is in good fate because it leaves room for the court to speculate.

“Since the medical report does not provide the duration of the bed rest, the court is enjoined to adjourned this matter in line with the provisions of section 306 ACJA. Accordingly this matter has been adjourned to May 30 for trial”, Justice Abang said.

Justice Abang, however, maintained that he shall be delivering his ruling on Metuh’s request to seek medical treatment abroad tomorrow.