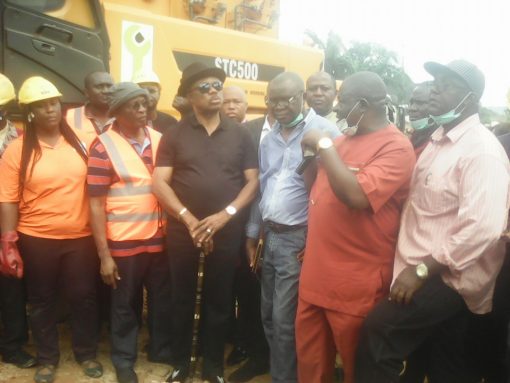 Prof. Godwin Onu, Rector of Federal Polytechnic Oko has stated that inferior materials were responsible for the collapse of a three-storey building on Sunday, 22 May.

Onu who lauded the National Emergency Management Agency (NEMA) for its quick response which led to the rescue of trapped workers alive, directed that all students whose hostels are close to the failed building be given tentative accommodation inside the school hostels pending when the Anambra Materials Testing Laboratory (AMTL) satisfies the fitness of occupancy of the surrounding hostels.

According to the Public Relations Officer of the Polytechnic, Obini Onuchukwu, the rector was accompanied on an on-site assessment by the management team of the institution.

Onuchukwu pointed that Onu has urged the Anambra State Laboratory test staff to quickly start testing other hostels susceptible to cracks within and outside the school.

He then distanced the institution from the ownership of the collapsed storey building, stressing that, the building was situated opposite the permanent site of the institution and that it is owned by a private estate developer and not the Institution.

Onuchukwu said the collapsed structure was located on a boundary village in Nwagu.

According to Onuchukwu, over 22 structures completed and ongoing in the Institution are in good condition as they were designed and handled by professionals stressing that there’s no record of collapsed structure in the Polytechnic.

The Public Relations Officer could not confirm if there were casualties as at the time of filing this report because the rescue operations were still ongoing.

“Our rector, Prof. Godwin Onu less than one hour after the collapse visited the scene of the incident and immediately gave directives for the evacuation of all students residing within the axis of the collapsed building for fear of the unknown.

“The students are currently being resettled and we are using this opportunity to call on well to do Anambrarians to invest in structural development in the Polytechnic to complement the efforts of the rector.

“It is also important for more professional evaluation and assessment of constructions by concerned agencies to ensure quality of jobs around the Polytechnic to avoid repeat of such,” he said.

Meanwhile the Governor of Anambra State, Chief Willie Obiano who later joined the rector at the scene said that the contractor and owner of the building will be prosecuted if found to have cut corners.

He then sympathized with the students whose hostels have been shut because of the incident but assured them that their safety was very important to the State government.

The Rector thanked the governor for making out time to come and see things for himself and further commended him for some of the safety measures he put in place in the State.