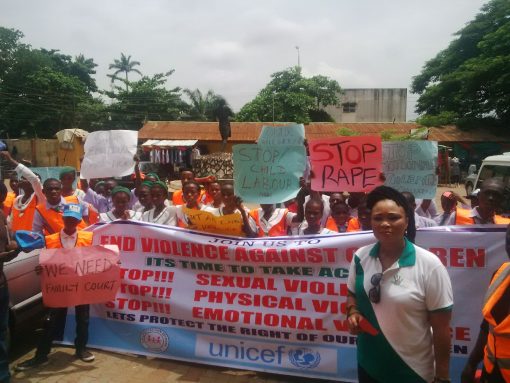 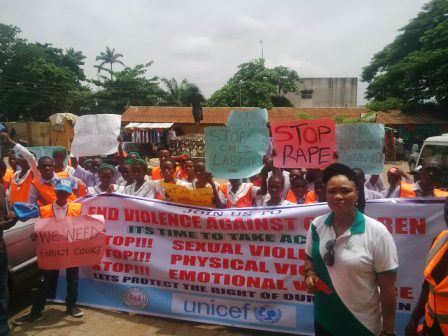 Coordinator of CPN, Ms Jennifer Ero, who led students of several secondary schools on awareness campaign to the Nigeria Union of Journalists (NUJ) in Benin, demanded for immediate establishment of a family court to take care of cases of abuse against children.

The students were armed with placards with various inscriptions, including “We need family court, stop rape, stop child labour.”

Amongst other things, they demanded for children, freedom from discrimination, right to health care services, free access to education and protection from abuse and exploitation of the children, including child labour and rape.

“As we all know, tomorrow is the national Children’s Day. ‎We are asking in Edo state, what are we really celebrating when the rights of our children are not being protected? We want family court [in the state.]‎ Without family court, the law would be just dormant.

“A survey that was carried out last year showed that nine out of 10 children have experienced different kinds of violence; either emotional violence, physical violence or sexual violence, and yet, we do not have a family court.

“All the cases of our children’s right ‎keep dragging in the courts. The children have no court of their own as we speak. We are saying we need that family court as a matter of urgency.

Ero who called on government to have a welfare package for the children, said research has shown that a lot of children drop out of school because their families cannot pay their fees, just as she called for palliative measures to strengthen such families to ensure that their children can move on.

“Edo children are saying enough is enough of biscuits and minerals at the stadium and marching under the sun‎. We cannot keep celebrating Children’s Day every year without this law being put in place because they are abusing our children with impunity.

“We want to issue red cards to all offenders of and all those abusing our children on the streets, and we are calling on the government to rescue these children and rehabilitate them,” she said.

Chairman of the League of Veteran Journalists (Edo State Council), Josiah Obadigie, who received the campaigners on behalf of the Council Chairman, Sir Roland Osakwe, said the campaign was apt, most important and and commendable.

The theme of this year’s Children’s Day is, “Protect the right of a child in the face of violence and security: end child marriage.”