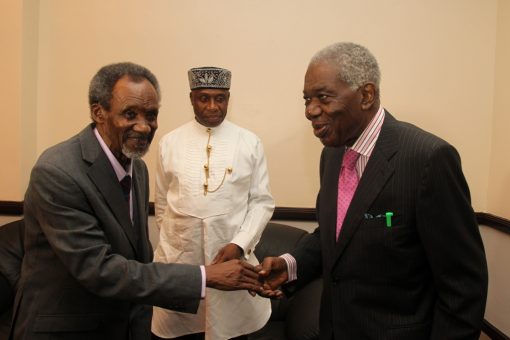 PIC: Minister of Transportation Chibuike Rotimi Amaechi flanked by the Chief Justice of Nigeria Hon. Justice Mahmud MohammedLeft) and former Head of State and Chairman of the event, Chief Ernest Shonekan at the 14th Maritime Seminar for Judges organized by a parastatal under the Ministry in collaboration with the National Judicial Institute(NJI) in Abuja, Tuesday

Minister of Transportation, Chibuike Rotimi Amaechi says the Federal Government is marshalling out ways of encouraging the establishment of a National Shipping Line to ensure maximum exploitation of the potentials in the maritime industry.

Amaechi also said, the Federal government is making efforts at improving business in the country’s maritime sector especially in the areas of establishing a deep sea port for modern mega ships as well as the establishment of dry ports such as the Kaduna inland dry port among others.

Amaechi spoke in a keynote address he delivered at the 14th Maritime Seminar for Judges organized by the Nigerian Shippers’ Council(a parastatal under his ministry), in collaboration with the National Judicial Institute(NJI).

According to the Minister, “The present administration is looking into ways of encouraging the establishment of a national shipping line to ensure maximum exploitation of the potentials in our maritime sector”.

“The Federal Government is doing a lot towards improving on the ease of doing business in Nigeria especially in the maritime sector. The Federal Government effort towards trade facilitation includes modernization of transport infrastructure such as establishment of deep sea ports to attract the patronage of our seaports by modern mega ships and the establishment of dry ports such as the Kaduna inland dry port and others all over the country to decongest the seaports and facilitate expeditious evacuation of cargo from the seaports among others,” he said.

While also suggesting that maritime laws should be made compulsory courses in tertiary institutions, Amaechi called on the chief Judge of the Federal High court to consider the creation of a maritime or admiralty division in the federal high court to specially handle maritime cases.

Also, Considering the crucial role of the maritime sector in the development of the economy, Amaechi said “May I remind you of the need for capacity building in the maritime industry. It is of general knowledge that most of our maritime trade is carried by foreign ship owners, thereby limiting the economic benefits accruable to the nation such as creation of jobs, freight and insurance earnings”.

Amaechi said the maritime seminar will equip the judges and Justices of superior courts of record as well as relevant stakeholders in the maritime industry.

In his own address, the honorable Chief Justice of Nigeria and Chairman Board of Governors of the National Judicial Institute, Hon justice Mahmud Mohammed said the seminar has contributed immensely to deepening the synergy between the judiciary and the maritime sector.

“The Nigerian judiciary stands ready
to deepen this synergy as part of our wider reform efforts that will reposition our judiciary for better justice delivery and retain our place as one of the best judicial institutions in the world”.

“In furtherance of its drive to ensure a quick dispensation of justice, the Nigerian judiciary remains similarly committed to the use of a multi-track, multi-modal justice delivery system that will include a more robust adoption of alternative dispute resolutions as a veritable medium of settling dispute”, he said.

“It is important for us to ensure that this seminar continues to provide a platform for introducing new concepts and refreshing our minds on novel areas of law that govern shipping international trade and admiralty matters,” he said.

“I will like to urge the Nigerian shippers’ Council and the National Judicial Institute to redouble their efforts to ensure the continuity of this seminar. So apart from its usefulness to the stakeholders, this international seminar also serves as a way of domesticating some of the international conventions and rules that are governing international trade in the maritime sector. Every effort must be made to sustain it”, he said.

Earlier, President Muhammadu Buhari who was represented by the Solicitor General and Permanent Secretary Ministry of Justice Mr. Taiwao Abidoku described as welcome development for the organizers of the seminar to encourage the training of judges and legal practitioners in the field of maritime.

“I am happy to note that efforts are being made by organizers of this seminar to encourage the training of our judges and legal practitioners in the important field of maritime law”.

“As we are all aware, the maritime sector constitutes the live wire of global trade and commerce in addition to its historical and current role in facilitating human interaction among communities, regions and continents. In view of this fundamental role we must therefore continue to develop the requisite human capacity to take advantage of opportunities in the sector,” he said.