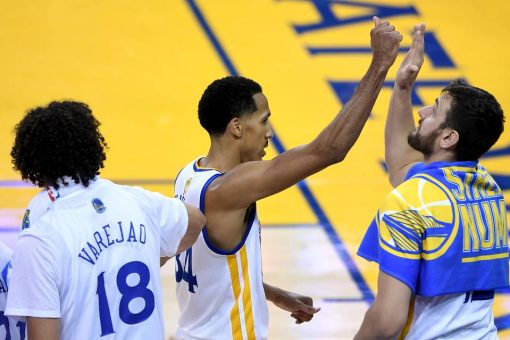 The Golden State Warriors are almost exactly the same team as the one that won last year’s NBA championship. They have the same starting lineup, the same superstar player and the same way of demoralizing the rest of the NBA with their devastating onslaught of 3-point shooting.

It turns out there is another collection of players who are mostly the same as last year’s Golden State title team: the ones who begin the game on the bench. Their offensive style isn’t as seductive as Stephen Curry’s. The way they play almost seems blasphemous for a team that was built around the 3-point line. Except it had the same effect Thursday as the Warriors’ usual sorcery: It won Golden State yet another basketball game.

In a season when Curry has been unstoppable, and Golden State has exploited the 3-pointer more than any team in NBA history, the Warriors beat the Cavaliers, 104-89, in Game 1 of the Finals, with everyone else and every other way.

Curry and Klay Thompson were outscored by 46 points by the Cavaliers’ fearsome trio of LeBron James, Kyrie Irving and Kevin Love. They were outscored by their own bench by 25 points. There was even one Warriors player, backup guard Shaun Livingston, who finished with as many points as Curry and Thompson put together.

“Even the best players in the world have bad nights,” said Warriors coach Steve Kerr.
Curry and Thompson, in fact, found themselves on the bench as the Warriors broke open Game 1. Golden State’s reserves extended a 71-68 lead in the third quarter to an 88-72 chokehold on the game in the fourth quarter. At one point, Curry and Thompson were the team’s seventh- and eighth-leading scorers, and yet the lead kept ballooning until Golden State’s transcendent shooters were hardly necessary.

No one was better in their absence than Livingston. He is Curry’s backup, but he is also Curry’s opposite. Livingston has a grand total of two 3-pointers in the past two seasons, which means his entire output of threes with the Warriors is less than Curry’s when he’s cold.

But what makes him such an effective complement is that he’s the rare 6-foot-7 point guard in today’s NBA with a nifty midrange game. Livingston poured in 20 points for the Warriors, all of them 2-pointers and free throws.

Of all the people in Oracle Arena, Curry was the one least surprised by Livingston’s performance. He’s the one who has to stick with him every day in practice. His own teammate, Draymond Green, calls Curry a “mouse in the house” when he’s marooned in the post with Livingston. “It’s the loneliest feeling in the world,” Curry said. “I’ll play the best defense of my life, and he’ll knock down a shot, and you’ve just got to live with the chatter.”

“Steph’s sneaky, though,” Livingston said, consoling his teammate, who happens to be the NBA’s two-time reigning Most Valuable Player. “Don’t let him fool you.”

It may have been the most demoralizing Cleveland loss imaginable. Heading into Game 2 on Sunday, Golden State has now knocked off Cleveland in six straight matchups, including last year’s Finals and this year’s regular season.

But this one was worse than a close game or even a torching ignited by Curry. This was the Warriors not playing that well—and still winning by 15 points.

Culled from The Wall Street Journal