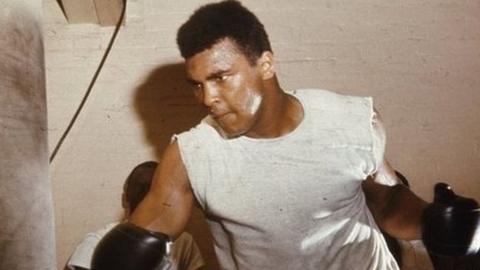 Muhammad Ali was vocal throughout his career, giving an opinion on just about everything – but here we look at what people said about him.

“I always felt like God made Muhammad special, but I don’t know why God chose me to carry this child.” Odessa Grady Clay, Ali’s mother

“When he was a child he never sat still. He walked and talked and did everything before his time. His mind was like the March wind blowing every which way.” Odessa Grady Clay

“Well, you better learn how to fight before you start challenging people that you’re gonna whup.” Police officer Joe Martin to a young Cassius Clay after the latter’s bicycle was stolen

“He used to ask me to throw rocks at him. I thought he was crazy, but he’d stand back and dodge every one of them… I could never hit him.” Rahman Ali, Ali’s brother

“Even at 18, Clay was the most vivid, the most alive figure I’d ever met.” Legendary American sportswriter Dick Schaap

“In private, a lot of the time he was real thoughtful and quiet. But he knew how to promote himself. God, he could do that.” Angelo Dundee, Ali’s trainer.

“He destroyed a generation of fighters by boxing with his hands down. Everyone who did that got creamed but Ali was so quick he could get away with it.” Angelo Dundee

“Everyone in Britain hates his bloody guts.” Britain’s Henry Cooper before his 1963 fight with Ali – Cooper floored Ali before being defeated

“I think I’m gonna have to hurt that boy bad.” Sonny Liston, who defended his world heavyweight crown against Cassius Clay in 1964

“I’m going to pull that big tongue out of your mouth and stick it up your ass.” Sonny Liston

“It will be the most popular fight since Hitler and Stalin, 180m people rooting for a double knockout.” American sportswriter Jim Murray on Liston-Clay

“Clay will win. He is the finest negro athlete I have ever known and he will mean more to his people than Jackie Robinson.” Civil rights activist Malcolm X on Liston-Clay

“Because billions of our people in Africa, Asia and Arabia love you blindly, you must be forever aware of your responsibility to them.” Malcolm X

“He has always been a little kid, climbing out onto tree limbs, sawing them off behind him and coming out OK.” Ferdie Pacheco, Ali’s fight doctor

“Cassius Clay is disgracing himself and the negro race.” Floyd Patterson, who fought Ali in 1965, on his rival’s politics and religion

“I wanted to go down with something that would be worthy of a knockout. Then in the 12th Clay became a punching maniac. A happiness came over me. I knew the end was near.” Floyd Patterson

“The greatest Ali ever was as a fighter was against [Cleveland] Williams. That night, he was the most devastating fighter who ever lived.” Legendary American commentator Howard Cosell on Ali’s demolition of Williams in 1966

“Cleveland Williams, that was a great fight, but… the greatest he ever looked was against [Zora] Folley. And if he had gone on from there? There’s no telling…” Angelo Dundee on Ali’s defeat of Zora Folley in 1967 – the last fight before his three-and-a-half year boxing exile

“Draft beer, not Ali!” A student banner after Ali refused induction into the US Army

“He is giving up millions of dollars to do what his conscience tells him is right.” Civil rights leader Martin Luther King Jr

“He’s hurting the morale of a lot of young negro soldiers over in Vietnam. And the tragedy to me is, Cassius has made millions of dollars off of the American public.” Baseball great and black sporting icon Jackie Robinson

“They refused to accept his testimony about his religious convictions. They took away his right to practice his profession. They tried to break him in body and mind.” The Reverend Jesse Jackson

“Ali bomaye! (Ali, kill him!)” A popular chant in the build-up to 1974’s ‘Rumble in the Jungle’ between Ali and George Foreman in Zaire

“I won’t kid you, when he went to the ropes, I felt sick.” Angelo Dundee on Ali’s ‘rope-a-dope’ tactics in Zaire

“I was going to knock his block off, and the thought of doing it didn’t bother me at all.” George Foreman

“The day of the Ali fight I bought my wife a powder blue negligee and told her ‘wear this tonight, ’cause you’ll be sleepin’ with the heavyweight champion of the world’. That night, when I got back to the room, she said: ‘Do I go to his room or will he be coming to mine?'”. Chuck Wepner, beaten by Ali in 1975

“I don’t want to knock him out in Manila, I want to take his heart out.” Joe Frazier before the ‘Thrilla in Manila’

“Man, I hit him with punches that’d bring down the walls of a city. Lordy, lordy, he’s a great champion.” Joe Frazier after the ‘Thrilla in Manila’, which Ali won

“Ali always said I would be nothing without him. But who would he have been without me?” Joe Frazier

“The ring activities of Muhammad Ali now have all the grace and sporting appeal of Russian roulette played with a pump-action shotgun.” British sportswriter Hugh McIlvanney after Ali’s defeat by Larry Holmes in 1980

“I know something’s wrong. I really didn’t want to hit you.” Larry Holmes after stopping an ailing Ali

“Boxing had robbed him of middle age. He was an old man at 41.” American sportswriter Dave Kindred on Ali’s struggles with Parkinson’s syndrome

“He was the greatest figure in my professional life. There was nobody remotely like him.” Hugh McIlvanney

“I don’t call him the best boxer of all time, but he’s the greatest human being I ever met.” George Foreman