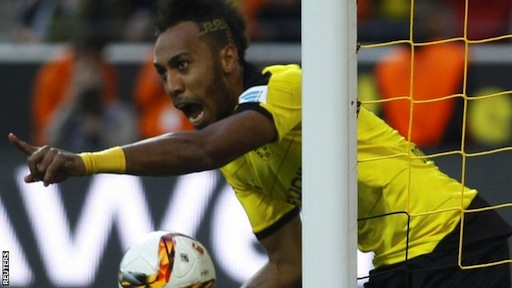 Jose Mourinho and Pep Guardiola are preparing for their first Manchester scrap – over Pierre-Emerick Aubameyang.

The new managers of United and City both want the Borussia Dortmund striker, who is valued at £65million. That fee for Aubameyang, 26, would be a British record signing.

Arsenal have also been linked with the Gabon international but they are now concentrating on England striker Jamie Vardy, who has a £20m buy-out clause in his Leicester contract.

So unless there is a move by Real Madrid, the Manchester clubs are set to fight it out for Germany’s Footballer of the Year.

Mourinho and Guardiola had a fierce, bitter rivalry when they were in charge of Real Madrid and Barcelona.

And their duels next season are set to light up not only Manchester but the Premier League generally.

Speed-merchant Aubameyang has held talks with Dortmund about his and the club’s future.

He is concerned that key players are leaving – like Mats Hummels to Bayern Munich and Ilkay Gundogan – who has joined Guardiola at City.

And City have the resources to tempt Aubameyang to The Etihad, too.

Guardiola meanwhile, is understood to have been in Manchester on Friday – to see his favourite band, Coldplay.

He does not officially start at City until July 1.

But he was also in Abu Dhabi last week to meet club owner Sheikh Mansour and chairman Khaldoon Al Mubarak.