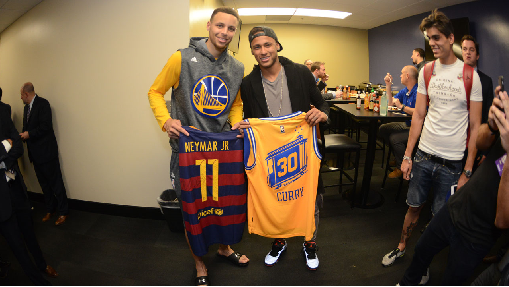 FILE PHOTO: Stephen Curry #30 of the Golden State Warriors poses with Neymar, after Game Two of the 2016 NBA Finals against the Cleveland Cavaliers on June 5, 2016 at ORACLE Arena in Oakland, California. Noah Graham/NBAE via Getty Images/AFP

NBA scoring champion Curry made the exchange shortly after the defending NBA champions seized a 2-0 lead in the best-of-seven championship series, which resumes Wednesday in Cleveland.

“It’s the first time we’ve met,” Curry said. “L.B. and Varejao talk about him all the time. But obviously a star in the soccer world, and such skill and kind of grace when he’s out there on the field, so he’s fun to watch.”

Neymar had been in the Rose Bowl on Saturday along such Hollywood celebrities as Justin Bieber and Jamie Foxx to watch Brazil play Ecuador to a goal-less draw in Copa America Centenario, the special 100th anniversary edition of the South American football championship being staged in US stadiums.

Neymar is skipping the Copa to focus on the Rio de Janeiro Olympics in August, where he’ll try to help Brazil claim one of the few trophies it lacks in football, Olympic gold.

Curry proudly displayed Neymar’s number 11 uniform while the Brazilian smiled as she showed off Curry’s number 30 on a yellow jersey.

That swap was engineered via social media, but it was fun for curry to see Neymar in person.

“I know he’s a basketball head,” Curry said. “I saw him dribbling two basketballs the other day trying to mimic my two-ball routine.

“I told him I appreciate that and he doesn’t want to see me with a soccer ball because I wouldn’t know what to do. It’s pretty cool to know we’ve got fans all over and obviously it’s inspiring what he does on the soccer field.”

Curry missed a chance to catch up with Messi, whose team face Chile in their Copa opener in nearby Santa Clara, California, on Monday.

“Obviously schedules didn’t work out,” Curry said. “But he’s got business to take care of, so good luck to him.”