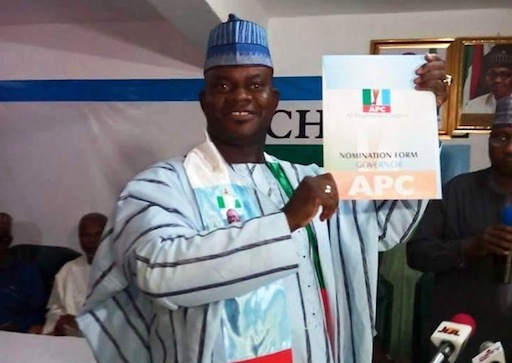 The Kogi State governorship election tribunal has ruled that the failure of Mr James Faleke to join INEC in his petition against the election of Governor Yahaya Bello is a major defect to his petition and therefore dismissed it.

The tribunal ruled that James Faleke lacks the locus standi to challenge the substitution of Late Audu Abubakar having not participated in the APC primaries that produced Audu Abubakar.

The Tribunal further held that the constitution does not recognize independent candidates as political parties are the ones vested with the power to nominate and sponsor a candidate for any election.

The Tribunal added that the APC was legally right to substitute its candidate due to force majeur as the November 21 election was declared inconclusive.

”It is parties that win and lose an election and APC was duly invited by INEC to present a new candidate following the death of Prince Audu Abubakar.

Records before the court showed that Yahaya Bello participated in the APC primaries that produced Audu and emerged as the runner up.

”Tribunal holds that there is valid material before it confirming the sponsorship of Yahaya Bello and having contested the primaries against Prince Audu, he was the best person to step into the shoes of the late Audu,” Channels Television reports.

Tribunal also dismissed Faleke’s claims that the 240,687 votes of November 21 was transferred to Bello because it held that the votes belong to the APC and not Prince Audu.

Mr James Faleke of the All Progressives Congress (APC) had asked the Kogi State election petition tribunal to declare him as the authentic winner of the November 21, 2015 governorship election in Kogi State on the ground that the current Governor, Mr Yahaya Bello never participated in the said election.

The petitioner was running as the deputy governorship candidate under the late Abubakar Audu up until INEC declared the poll inconclusive after Mr Audu died.

INEC went ahead to ask the APC to nominate a replacement for the deceased.

Mr Bello was nominated and he selected Mr Faleke as his deputy, but Mr Faleke declined.

Mr Faleke thereafter approached the tribunal asking it to declare him governor-elect.