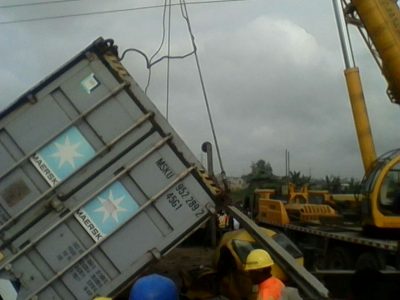 Seven commercial motorcycles (Okadas) were also involved in the accident.

According to the General Manager, Lagos State Emergency Management Agency, LASEMA, Michael Akindele, the Agency received a distress call on Wednesday regarding an accident at Alakija which occurred at about 8 a.m.

“The agency’s Emergency Response Team at Cappa in conjunction with the Lagos State Fire Service, the Nigeria Police Force, LASEMA officials, FRSC, LASAMBUS and officials of the China Civil Engineering and Construction Company, CCECC were involved in the recovery operation.

“The commercial mini-van and seven commercial motorcycles (Okada) were badly damaged as a result of the accident. Five persons were involved in the accident. This comprises three dead male adults while two persons sustained severe injuries and had been taken to the hospital for treatment,” he said.

Akindele added that the Eko Distribution Company was quickly alerted to switch off the power supply in order to prevent any form of electrocution as the tanker also damaged some of the company’s poles.

Akindele advised trailers owners and drivers to ensure proper checks and road-worthiness of their trucks and also drive within the approved speed limits.

He also advised okada riders to adhere to the traffic law of the State in order to avoid loss of lives and properties such as this.

Akindele said the police would conduct further investigation into the incident.