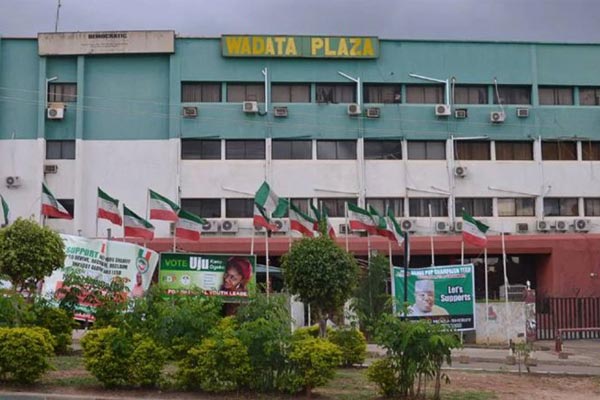 The National Headquarters of the Peoples Democratic Party (PDP) is yet to be reopened, 52 days after it was shut, just as the party’s leadership crisis remains unresolved.

A correspondent of the News Agency of Nigeria (NAN) who visited the party’s national secretariat on Tuesday reports that its entrance was still locked and manned by men of the Nigeria Police.

As at the time of visit, 2 p.m., no fewer than 10 police officers were seen within and outside the secretariat.

A police Hilux vehicle from Wuse Division, marked NPF 6684C, was used to block the access road to the complex.

However, few staff of the secretariat were seen hanging around under trees, nursing the hope of having the office reopened soon.

One of the party’s workers who spoke on condition of anonymity expressed displeasure with the continuous closure of the secretariat.

“Some of us have been coming around with the hope that the office would be opened for staff to work; but I think the office will be open soon, perhaps later in the day.

“There is a meeting going on now with the acting Inspector-General of Police, Ibrahim Idris, involving delegates from the Sen. Ali Modu Sheriff and Sen. Ahmed Makarfi factions.

“I believe the office gates should be opened, latest tomorrow,’’ said the staff.
The staff, however, added that in spite of the crisis, the party was not owing staff salaries.

Armed police officers had on May 22 blocked all the entrance gates to the secretariat, preventing human and vehicular movements to the facility.

The action, according to the police, was to prevent crisis from springing up following the party’s May 21 national convention held in Port Harcourt.

The convention sacked the interim chairman, Ali Modu Sheriff, with all the National Executives and members of the National Working Committee.

It also saw Makarfi emerging as head of the Caretaker Committee of the party.