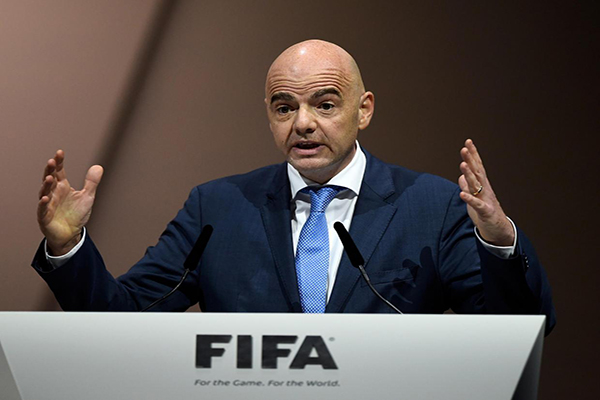 The President, Sports Writers Association of Nigeria (SWAN), Honour Sirawoo, says the expected visit of FIFA’s President, Gianni Infantino to Nigeria will open a new vista for the nation’s football.

Sirawoo made the assertion in a statement by the association’s Secretary-General, Olawale Alabi, on Sunday in Ilorin.

The statement said the visit underscored the regard Nigeria enjoyed in the politics of international football as a result of the untiring efforts of the Amaju Pinnick-led Nigeria Football Federation (NFF).

It said the visit would also serve as a veritable platform for stakeholders to share ideas on the advancement of Nigeria’s potential in the game.

Infantino and FIFA’s Secretary-General, Fatma Samoura, will visit Nigeria on July 24 on a two-day working visit.

“It is no mean feat to have the FIFA president visiting Nigeria with other world football officials. I congratulate the NFF on this.

“It’s a great job which must be fully utilised toward the uplifting football standard in Nigeria, especially now that the country’s rating is dwindling in FIFA ranking.

“I urge all stakeholders and Nigerians in general to support the Amaju Pinnick-led NFF’s quest to move football forward.

“Of course, the visit of the FIFA president will enhance the interest of corporate Nigeria in football development more than what it is in recent times.

“This in turn will promote wealth creation in line with our agenda,’’ the statement said.

It said the association would support NFF in repositioning Nigeria’s football for maximum benefits as applicable in most countries of the world.

It added that the zonal Vice-Presidents of North Central, South-West and South-South had been directed to ensure full involvement of members in activities related to the visit.

The statement also said that they had been directed to be involved in the burial of former national football coaches.

“I have therefore directed our zonal vice-presidents to coordinate the activities of members in host state chapters such as Lagos, FCT, Delta and Edo,’’ it quoted Sirawoo as saying.

The statement, which also commended FIFA for appointing an African, Fatma Samoura as Secretary-General, noted that her administrative acumen would be invaluable in reshaping the world football governing body.