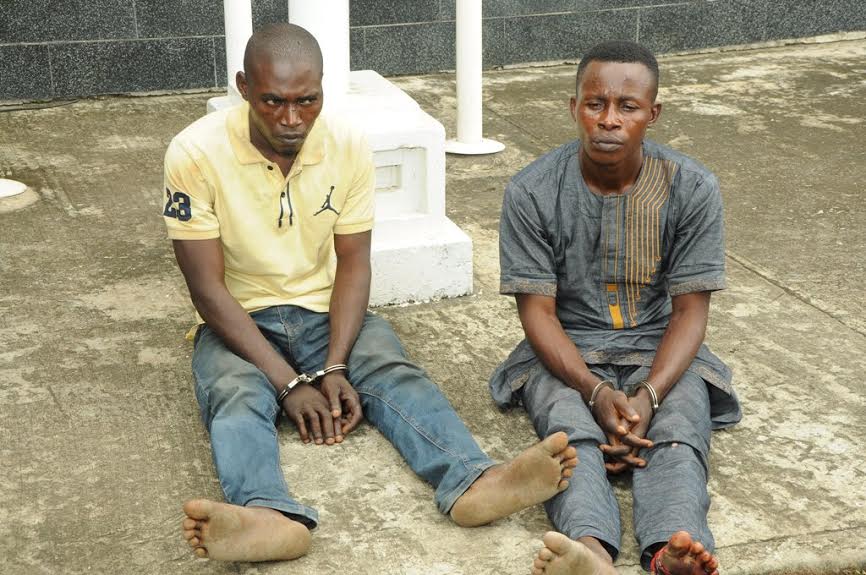 One of the arrested suspected kidnappers who abducted the Oniba of Iba land, Oba Goriola Oseni has narrated how they kidnapped the monarch and successfully collected N15.1 million ransom before releasing him.
The monarch was released on Saturday by his abductors after spending three weeks with the kidnappers at the creek.
The police have arrested two of the suspected kidnappers and were paraded at the State House, Ikeja, Lagos, Southwest Nigeria on Sunday. The two suspects are Toba Forejo and Isaiah Ododomu, both from Ondo State.
Narrating the account to newsmen on how they kidnapped the oba, Ododomu said nine people went to the palace to kidnap the oba on that fateful day.
He gave the name of those who went to the palace to kidnap the oba as Toba, Igodo, Mighty, Folly and Sam, while one Micah who is a leader did not go with them because he “he has a babe with him at home.”
He explained that the kidnappers were armed with two AK-47 riffles and three pump action guns which they used during the kidnapping.
Ododomu, who said he used to be a bunkerer, explained that since the bunkering business had been stopped, they decided to go into kidnapping.
He disclosed that the kidnappers first collected N12 million ransom and later demanded for another ransom and were given N3.1 million extra, making a total of N15.1 million which they shared among themselves.
“I am a bunkering man, when this government stopped the bunkering business, our leaders fomed another group and we started kidnapping to manage ourselves. I am a married man and I don’t have any job to cater for my family. When we started the kidnapping business, whenever they collected N500,000, they will give me N20,000.
“After this one, Toba, Igodo, Mighty, these eight people, went to Iba junction, they kidnapped the king, after they kidnapped him, they demand for N500 million, after that they reduced it to N40 million. They gave them N12 million at the first time. After that we gathered and shared the money.
“All our senior people got the lion share of the money. They gave Toba N1 million, all those Igodo, Micah, they collected N2.5 million and so on; for me, they gave me N100, 000,” he explained.
He added that after he travelled and came back, some of them agitated that the money given to them was small and decided to demand for the remaining N28 million balance, but noted that he was the one who prevailed on them to collect anything from the monarh’s family so that they could disperse before they were arrested.
“I told them that we should collect any amount and decamp because they can arrest us. Because of me, they agreed to collect N3, 100,000. The family of the oba brought the money and they dropped it for us at Igbehinadun water side. We went there and brought the money and they gave me N100,000. Toba and the others shared the remaining money. Our base of operation is at Izegemo creek in Ikotun area,” he explained.
Ododomu said he was the one who paddled the oba on the water to Iba while the others fled and that he was arrested.
One of the prime suspects, Toba Ferejo also said they were nine people who kidnapped the monarch, saying that he was arrested at Iyana School area.