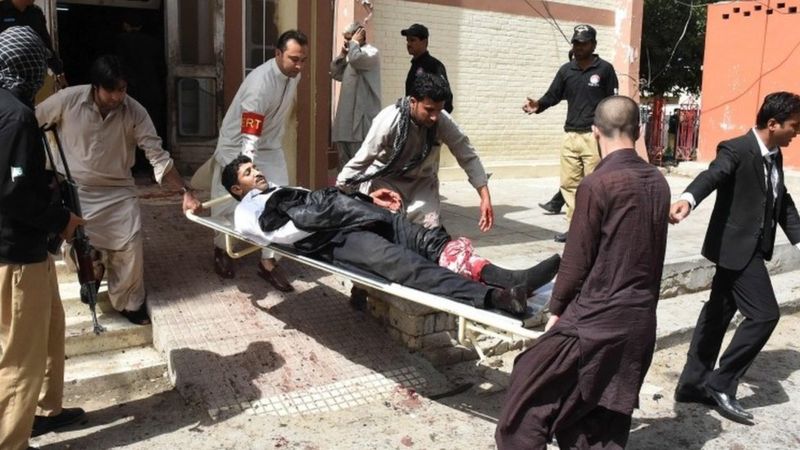 A suicide bomb attack has killed at least 70 people at a hospital in Quetta in south-west Pakistan, officials say.

About 120 others were injured in the blast, which happened at the entrance to the emergency department where the body of a prominent lawyer shot dead earlier on Monday was being brought.

The casualties included lawyers and journalists accompanying the body of Bilal Anwar Kasi.

A faction of the Pakistani Taliban has said it was behind the bombing.

Jamaat-ul-Ahrar said it had also carried out the earlier attack on Mr Kasi, who was president of the Balochistan Bar Association and had been shot while on his way from his home to the main court complex in Quetta.

Witnesses described scenes of chaos after the hospital blast, with “bodies everywhere” and survivors shouting for help through the smoke and dust.

Pakistani Prime Minister Nawaz Sharif and chief of army staff Gen Raheel Sharif have both gone to Quetta and will hold talks with security officials.

Gen Sharif met some of those wounded at the Quetta Civil Hospital.

Mr Sharif expressed his “deep grief and anguish”, adding: “No-one will be allowed to disturb the peace of the province. The people, policy and security forces in Balochistan have given sacrifices for the country.”

The president of Pakistan’s Supreme Court Bar Association, Syed Ali Zafa, denounced the assault as “an attack on justice”. The Pakistan Bar Council has announced a nationwide strike by lawyers on Tuesday.

The Chief Minister of Balochistan, Sanaullah Zehri, said those injured should be given the best medical treatment and facilities available.

There have been a number of targeted killings in Quetta and the victims in recent weeks have included several lawyers.

Mr Kasi had strongly condemned the attacks and local media said he had announced a two-day boycott of court sessions in protest at the killing of a colleague last week.

Those killed in the hospital attack were said to include Baz Muhammad Kakar, a predecessor of Mr Kasi as provincial bar president, and 17 other lawyers.

Lawyers in Lahore staged a demonstration to condemn the attack. Some journalists also protested, demanding protection for freedom of expression.

Facebook has activated its safety check feature for Quetta, allowing users to mark themselves or others as being safe.