Rio Olympics 2016: Djokovic crashes as Murray lose one, win one 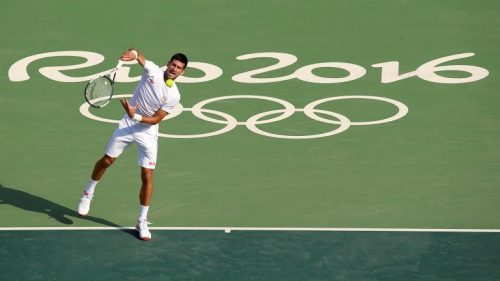 Andy and Jamie Murray are out of the men’s doubles, while top seed Novak Djokovic lost in the singles, in some of the matches played Sunday at the Rio Olympics.

But Djokovic, Troicki’s team-mate, is out after a shock loss to Argentina’s Juan Martin del Potro.

Del Potro had dropped out of the top 100 after being plagued by a serious wrist injury over the past couple of years.

Djokovic, 29, has won four out of the past five Grand Slams, but also suffered a surprise early exit at Wimbledon last month.

After warmly congratulating Del Potro at the net, he left the court in tears after failing to improve on the bronze medal he won at Beijing 2008.

His defeat opens up the draw for second seed Murray, 29, who beat Troicki 6-3 6-2 to progress to the second round.

After losing his serve in the first game, the Scot went on to control the tempo of the match.

British women’s number one Johanna Konta also recorded a straight-set wins in her first-round tie on her Olympic debut.

Konta, who won in the women’s doubles alongside Heather Watson on Saturday, beat Liechtenstein’s Stephanie Vogt 6-3 6-1.

The 25-year-old 10th seed had to see off two break points in the first set before taking control against the world number 290.

In the doubles, the Murrays saved six match points, and wasted five set points, in an epic second-set tie-break before Bellucci and Sa eventually completed the win.