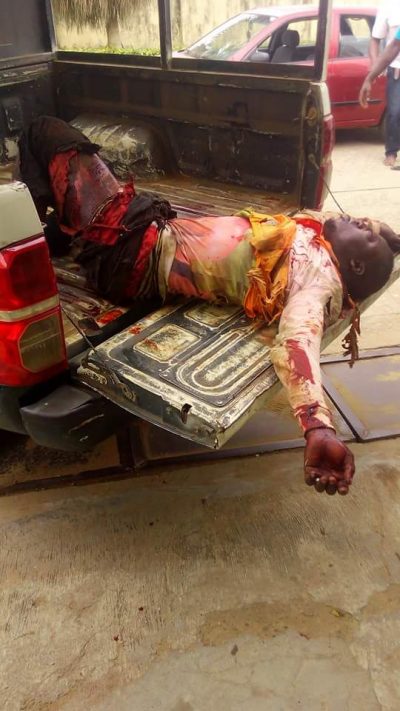 One of the accident victims being taken to the hospital

A witness, Yusuf Adebayo blamed the accident on overspeeding and break failure.

Narrating the incident to our correspondent, the witness said, “the accident involved two trucks. One of the trucks broke down on the road and was being repaired. The other truck, with registration number MU 008 rammed into it after he driver lost control.

“The driver of the second truck was trying to avoid the broken down truck when it swerved to the right and hit commercial motorcycles, killing three riders and two passengers.

Some of the injured were taken to the hospital in the town.

A police source at the Sagamu Police Command confirmed the accident to our correspondent, adding that the deceased had been taken to the morgue at OOUTH, Sagamu.

A member of the Red Cross, Yinka Fashina, who took part in the rescue effort also confirmed the accident.

According to her, ”we were having our camping at the NYSC, Sagamu yesterday when someone came and informed us of the accident.

“We rushed down there and met some of the victims in a pool of blood. Those that have died were deposited at the mortuary of OOUTH while those injured were taken to the hospital for treatment.