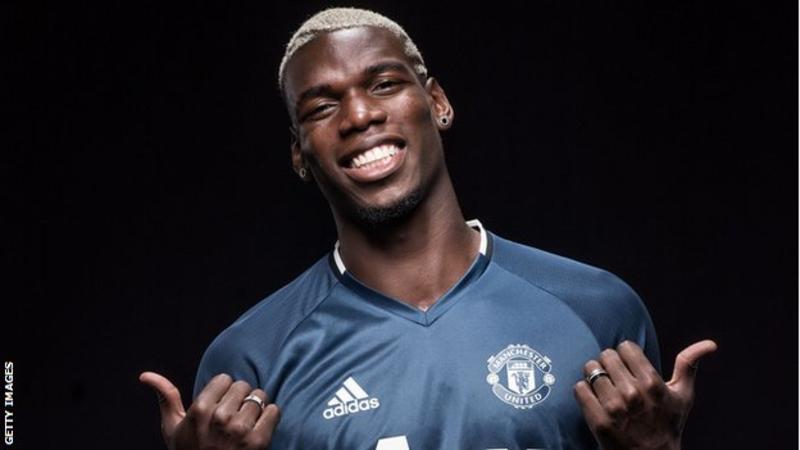 Paul Pogba said “the time is right to go back to Old Trafford” after completing his world-record £89m transfer to Manchester United.

The 23-year-old midfielder returns after four years away, having left United for Juventus for £1.5m in 2012.

Pogba, who signed a five-year deal, added: “This is the right club for me to achieve everything I hope to.”

Manager Jose Mourinho said the France international could be “the heart of the club” for the next decade.

United will pay the Italian champions 105m euros for Pogba, plus 5m euros (£4.5m) in performance-related bonuses and other costs, including 5m euros if Pogba signs a new contract.

It surpasses the £85m that Real Madrid paid Tottenham for Wales forward Gareth Bale in 2013.

The announcement was made by United just after 00:30 BST on Tuesday, with a glossy video showing the player – with a red devil marked into his hair – emerging from the shadows.

It was followed by a series of sponsor videos, including one with English rapper and grime artist Stormzy, whose most successful song to date is ‘Shut Up’.

Pogba, who helped hosts France reach the Euro 2016 final, has won the Serie A title in each of his four seasons at Juventus.

It will be the first time in 20 years an English club has set a world-record transfer fee, after Newcastle United paid £15 to sign England striker Alan Shearer from Blackburn Rovers for £15m.

Pogba joined United from French club Le Havre in 2009 as a 16-year-old, but made just a handful of appearances before his contract expired in July 2012.

He has made 178 appearances for Juventus, scoring 34 goals, and helped the club reach the 2015 Champions League final. The Serie A side had offered him a new contract, while Real Madrid were also interested in signing him.

Pogba said his mum told him he would return to Old Trafford and that it was his “destiny.”

Speaking to MUTV, he added: “I just came back to Carrington. It was like I’d just come back home. I just went for a holiday.”

In a series of messages to Juventus supporters on social media, Pogba said: “Goodbye means nothing, it is the time we spent together that matters. I will bring with me a piece of you and leave you a little piece of me.”

The move has rumbled on all summer, with the back pages of the newspapers featuring reports of deals done, deals delayed, counter-bids from big-club rivals, denials and intrigue over agents’ fees.

At Mourinho’s first Old Trafford news conference on 5 July he said he wanted to sign four players and had secured three. Many believed the fourth was Pogba.

It has taken more than a month since then for the Portuguese to get his man.

On 9 July, United finally declared their official interest but there were rumours the player preferred a move to Real Madrid.

Following’s France’s Euro 2016 final defeat by Portugal, Pogba went on a long holiday to the USA.

His agent Mino Raiola said a number of clubs were interested in his client and continued to deny a deal with United had been agreed.

On Saturday, Juventus boss Massimiliano Allegri summoned Pogba to training, but just a day later United announced the player would have a medical – and on Monday he arrived in Manchester.

But it took until the early hours of Tuesday BST for the deal to finally be announced, a delay that Pogba called “annoying”.

Writing on Instagram, he said: “This transfer took so long because it was a huge decision and involved lots of thinking and work.”

Pogba claimed he left the club “frustrated” and “disgusted” because former manager Sir Alex Ferguson did not play him.

Ferguson said he “distrusted” Pogba’s agent, Raiola, and alleged an agreement with Juventus had already been made.