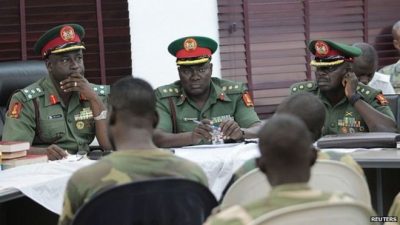 Some soldiers facing court-martial in Nigeria

The Nigerian Army on Wednesday constituted a General Court Martial to try 20 soldiers of different ranks for offences ranging from murder to sales of firearms in counter insurgency warfare in the Northeast.

The acting General Officer Commanding, the 7 Division of the Nigerian Army, Brig. Gen. Victor Ezugwu, who inaugurated the GMC said the offences were committed within the Theatre of Operation Lafiya Dole, reports Punch

Ezugwu said that some of the accused were involved in criminal activities which include murder, crimes against civilians, and illegal sales of firearms. He said, “The court martial is to achieve timely and quick dispensation of Justice within the framework provided in relevant statute books.

“Therefore, it is important that both the Prosecution and the Accused Persons or their counsel are mindful of this fact and strive to shun all forms of antics such as request for frivolous adjournments which could lead to delays in the trial processes.

“It is often said in the legal parlance that, justice delayed is justice denied.” He asked the president and members of the GCM to dispense the assignment in accordance with the appropriate extant laws and ensure that their decisions on all the cases before them was not clouded by bias.

The GOC said over a hundred soldiers have been tried and punished at the Brigade level over acts of indiscipline and unprofessionalis.