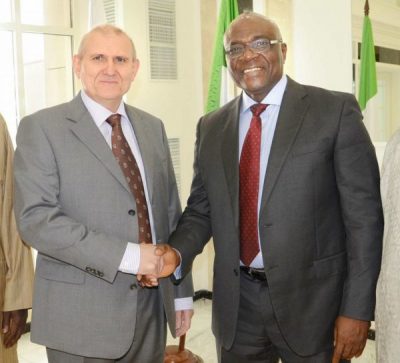 Nikolay Udovichenko, ambassador of Russia in Nigeria said on Tuesday in Abuja that his country would build a strong economic relationship with Nigeria.

Receiving the Managing Director, News Agency of Nigeria (NAN), Mr Bayo Onanuga, at the embassy, Udovichenko said Russia was ready to partner with Nigeria in its efforts to rebuild its economy.

He said trade between the two countries stood at 400 million dollars but noted that there was an ample room to expand it.

He said a Russian delegation, to be led by the Minister of Agriculture, was due in Nigeria in November to discuss areas of cooperation between the two countries.

Udovichenko also recalled the agreement signed between the two countries for the setting up of a nuclear research centre in Nigeria which would eventually lead to the building of a nuclear plant within the next seven years.

He said Russian companies were ready to give more favourable terms to Nigeria and work toward transferring technology to build the capacity of Nigerians.

The envoy said 10 Nigerians were receiving training in Russia in nuclear technology as part of the agreement signed in June.

He advised the government to give priority to agriculture so as to create more jobs, provide food and essential raw material to the industry.

The envoy promised to facilitate a news exchange agreement between NAN and ITAR-TASS to improve information flow between the two countries.

He stressed the need for closer cooperation between the media of the two countries so as to create better understanding and protect the image of both countries.

Earlier, the managing director said that the visit was aimed at strengthening the relationship among the media outfits of the two countries which spanned more than 30 years.

Onanuga said NAN had launched a new general news website. He said the agency would launch in due course two others dedicated to the supply of photos, video and audio contents to its subscribers.

He appealed to the envoy to facilitate the renewal of news exchange agreements between NAN and the two major Russian news agencies , adding that this would create further understanding among the people of the two countries.