No results yet in Zambia, but monitors say vote was transparent 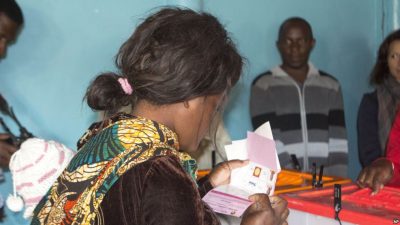 Voting continued past midnight Thursday in some areas of the country, due to the late arrival of ballots. But electoral commission officials in Lusaka confirmed all voting was complete Friday and vote-counting was underway. They declined to estimate when certified vote results would be available.

The incumbent president, Edgar Lungu of the ruling Patriotic Front party (PF), faced his main challenge from Hakainde Hichilema of the opposition United Party for National Development (UPND). News reports late Friday quoted Hichilema as accusing the electoral commission and the ruling party of an attempt to rig the vote; government and party officials denied the allegations.

CCMG, a coalition of four faith-based organizations, has been conducting an independent tabulation of the presidential vote in parallel with the government’s electoral commission. The monitoring group has been observing the electoral process in all of Zambia’s districts for the past 12 months.

Ifoma Mulewa, the CCMG’s project director, said 1,404 observers were deployed nationwide for the vote. She credited the electoral commission with establishing a sense of transparency about the election.

“A lot of the stakeholders complained about some of the issues – especially related to the gagging of the media, unbalanced coverage. I think those are some of the outcries that we had – [about] impartiality by the police, [in] that they were not very professional in some of the things that they did,” Mulewa said.

Overall, she added, Zambians turned out in large numbers, and the complaints the CCMG heard “did not take anything away” from Thursday’s results.

A Zambian police spokesperson, Rae Hamonga, told VOA voting overall was peaceful, despite a few isolated cases of violence, including an incident in southern Zambia where one person died following a clash between supporters of the ruling party and the opposition.

“We had a few challenges,” Mulewa said. “We said 90 percent of the polling stations were able to open not later than 6:30 [a.m.], which is a very good thing for us.”

“We only had 10 percent where there were a few shortcomings,” the CCMG official added, such as a few polling stations that did not open until 4 p.m., “which is a very big challenge because it meant people were voting overnight.”

“We had very few cases where monitors … from civil-society organizations were hindered” in performing their work, she added.

“The most tragic situation,” Mulewa said, was in the southern region of Zambia, where “cadres from the ruling party stormed a polling station and agitated people that were in a queue [waiting to vote]. Apparently some of [the voters] were from UPND and they started fighting.” One of the people injured in the fighting died on the way to a hospital, she added.

Mulewa’s comments came after the ruling party released a statement saying that “criminals” hired by an opposition party are going around in PF party regalia, beating people in the capital, Lusaka. The PF did not name the opposition party allegedly involved in hiring thugs.

“We have just established that the scheme is meant to create the impression that our cadres are beating people up and creating chaos at polling stations where our peaceful people are patiently awaiting the declaration of the results. This development has forced us to kindly alert our members in Lusaka and the general public to look out for such criminals,” said Frank Bwalya, deputy PF spokesperson.