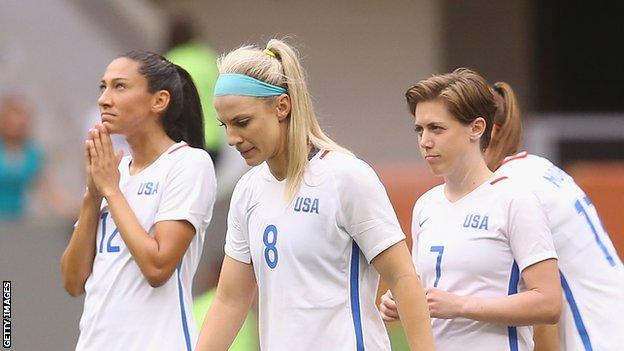 USA women football team dejected after the loss to Sweden

United States goalkeeper Hope Solo says her side were knocked out by a “bunch of cowards” after losing to Sweden on penalties in the Olympic quarter-final.

It is the first time the defending champions have failed to reach the semi-finals of a major tournament.

The game finished 1-1, before the USA’s Christen Press missed a vital fifth effort in the shootout allowing Lisa Dahlkvist to win it for the Swedes.
Advertisement

“The best team did not win today,” said Solo, who has won more than 200 caps.

Sweden had taken the lead on 63 minutes through Stina Blackstenius, before Alex Morgan equalised with 13 minutes left.

“I’m very proud of this team,” added Solo, 35. “But I also think we played a bunch of cowards. They didn’t want to open the game.

“They tried to counter with long balls. I don’t think they’re going to make it far in the tournament. I think it was very cowardly. They’re moving on and we’re going home.”