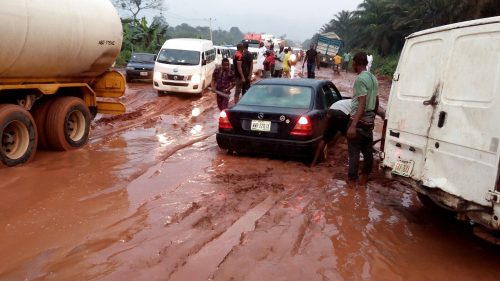 Motorists on a bad portion of the Benin-Auchi-Okene road.

It would be recalled that the company that started the dualization work on the highway in 2012, moved out of site late 2014 due to non-payment.

Mr Denis Orji, the Federal Controller of Works, confirmed this in Benin on Saturday.

Orji said the mobilisation of RCC back to site has seen more than 300 workers that were laid off after they closed site in 2014, reabsorbed.

The controller said the first task before the construction company was to see that the potholes and failed sections of the highway are made motorable.

“Though their scheduled is between Benin/Ehor section of the road, but they are to ensure that the section up to Iruekpen is passable by carrying out maintenance work.

“If you go through the road as we speak, you will see that the company have done a lot of work on the area they are maintaining, what is left for them majorly is to put bitumen.

“You will see that they have moved equipment back to site, but by next week, you will see more of the equipment,” he said.

It would be recalled that the Federal Government, under Goodluck Jonathan administration, awarded contract for the dualization of the highway from Benin to Lokoja.

Four different construction companies were awarded contract for the four lots/sections up to Lokoja.

The road, particularly the highway between Benin to Okene has become very bad.