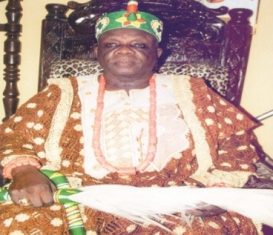 One week after the release of the kidnapped 73-year-old Oba Goriola Oseni of Iba in Lagos State, the residents and family members had appealed to the state government to beef-up security in and around the community and the state.

Investigations at the community on Saturday revealed that the people of the community were still living in fears and were apprehensive to provide information to journalists.

The residents remained in a fearful mood following the kidnap of their monarch, Oba Oseni on Sat. July 16, only to be released on Sat. Aug. 6 after a N15.1 million ransom had been paid.

In the process of abducting the 73-year-old oba by gunmen in his palace, five persons that included the monarch’s wife were alleged to have sustained various degrees of injuries from guns shots.

In the process, two of them died.

Residents of Oniba Street, in Iba junction where the Oba’s palace is located had become deserted while the few residents displayed palpable suspicions to strangers.

The vice-president, Iba Estate, Mr Johnson Olabode, however, told NAN that residents were still surprised that their traditional head could be a target for criminals.

“Everyone in the community is still surprised and living in fear, residents felt bad that a highly placed personality could be an object of scorn.

“We appeal to the relevant authorities to beef-up security in and around the community and the waterways to forestall any future recurrence,” he said.

Olabode also appealed to the residents to be vigilant and conscious of internal security, checking movements of strange faces coming in and out of the community.

An old woman living close to the palace declined to comment

A hotel operator in the estate who pleaded anonymity said he and his colleagues had intensified screening of their customers to ascertain their intentions.

“Since the incident, we have improved surveillance in and around the hotels and bars and other relaxation joints in the community, we check the type of customers coming in and going out,” he stated.

Places of worship within the community also screened members before they would be allowed in.

It was also observed that some uniformed security personnel were manning the gates leading in and out of the oba’s palace and monitoring every one’s movement.