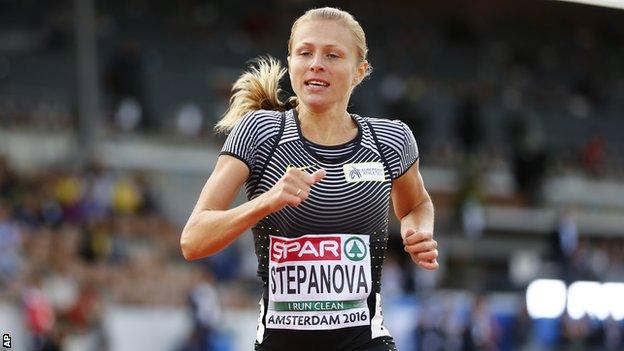 Russian whistleblower Yuliya Stepanova has had the account that shows details of her location hacked, the World Anti-Doping Agency has confirmed.

Stepanova is in hiding after helping to expose Russian state-sponsored doping.

Wada, which had been alerted that its website had been hacked, found the 800m runner’s account had been accessed by someone other than the athlete.

“Wada is in contact with the relevant law enforcement authorities,” a statement said.

Wada’s Anti-Doping Administration & Management System (ADAMS) allows athletes to enter information about their whereabouts from anywhere in the world to help the agency co-ordinate testing.

“Through regular security monitoring of ADAMS, the agency noted that someone, other than Ms Stepanova, had accessed her account,” said the statement.

“A subsequent investigation allowed the agency to determine that no other athlete accounts on ADAMS have been accessed.”

Stepanova and her husband Vitaly, a former Russian anti-doping official, are currently living in a secret location following her evidence to Wada’s report into Russian doping.

The couple, who left Russia after giving evidence, told the BBC last month that they “felt safe” in their new location.

“Wada, since the beginning, said they are concerned about our personal safety – they were the ones trying to protect us with the information we have,” they said.

“In our current location we do feel safe, but unfortunately the reaction to our actions in our home country is not positive, a lot of people in general and athletes as well hate us for what we did and we would not go back to Russia right now. There we would feel unsafe.”

Russia’s athletics team was banned from the Rio Olympics but Stepanova, who served a two-year ban for blood passport abnormalities in 2013, had hoped to be invited to the Games by the International Olympic Committee to compete under a neutral flag.

However, she chose not to contest her ban by the IOC.