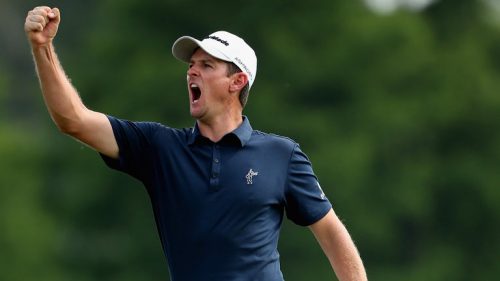 Great Britain’s Justin Rose became golf’s first Olympic champion since 1904 by beating Henrik Stenson to gold in a thrilling final round at Rio 2016.

Rose, 36, was level with Stenson on 15-under par after 17 holes but the Swede bogeyed the last while Rose sank a birdie putt to win by two shots.

Open champion Stenson (68) took silver, with American Matt Kuchar carding a 63 to claim bronze on 13-under.

“That felt better than anything I’ve ever won. It was the best tournament I’ve ever done,” said Rose.

“Hopefully we’ve shown Brazil what golf is about. I’m glad it was close. Not for my nerves, but for golf.”

It was the perfect outcome following the realisation of a seven-year dream for Rose, who secured Britain’s 12th gold medal in Rio.

Several other high-profile golfers had decided not to compete at the Olympics, but Rose had relished the prospect of becoming an Olympian.

This had been since the moment the sport’s return to the Games was confirmed in 2009.

The eagerness to be part of the whole experience made Rose arrive in Brazil in the week before the Olympics officially started to ensure he was part of the opening ceremony.

The Englishman made history by hitting Olympic golf’s first hole-in-one in the opening round and started Sunday with a one-shot lead.

He then shot four birdies and just one bogey on his outward nine.

However, Stenson was in determined mood.

Birdies in four of his first 10 holes kept him within touch of the leader, and when Rose dropped a shot on the 13th they were level.

It looked like a playoff would be needed to separate them, but Rose held his nerve on the par-five last.

He chipped his approach to two feet from the hole, while Stenson’s spun away to around 20 feet.

The Swede then raced his birdie putt eight feet past the hole and missed the return to allow Rose the luxury of two putts for victory.

But he needed just the one.