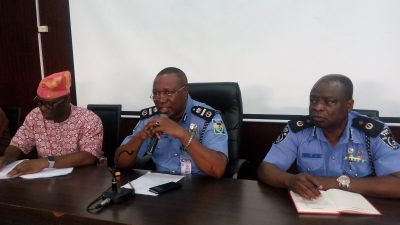 AIG AbduMajid addressing officers and men of the Zone 2 Command

The Assistant Inspector General of Police in charge of Zone 2 Command, Abdulmajid Ali has directed his men to treat land grabbers in the zone as armed robbers.

He directed the two commissioners of police in Lagos and Ogun states to order their men to arrest and treat any land grabber caught disturbing the peace of the zone as kidnappers, armed robbers and murderers because their criminal actions are tailored to these capital offences.

Ali also directed the Police Commissioners in both states and anti-crime team at the zonal command headquarters in Lagos, to dislodge land grabbers creating crises in some parts of the zone.

The police boss gave this directive while addressing senior officers and some stakeholders in his office at Onikan, Lagos.

In a statement released on Tuesday and signed by the zonal PPRO, SP Muyiwa Adejobi, Abdulmajid Ali confirmed that he had received over 300 petitions against land grabbers since he assumed office on 1 August, 2016.

He described the trend as unacceptable and threatened to deal decisively with the land grabbers.

Ali also promised to work with the governments of both Lagos and Ogun states to enforce any law or legislation made to checkmate land grabbers and their criminal acts within the zone.

The Lagos State governor, Akinwunmi Ambode, on Monday signed into law a bill that criminalised land grabbing in the State.

Also in Ogun State, the bill has scaled through the second reading.

Ali urged members of the public to report any illegal act of the land grabbers to him. He vowed not to tolerate them in the zone.