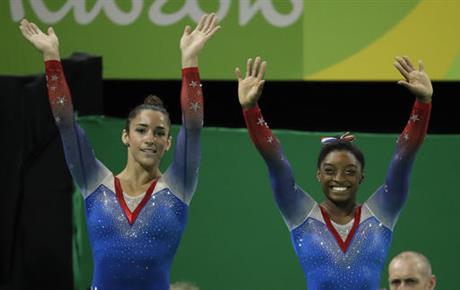 American Simone Biles put the finishing touches on one of the greatest Olympics by a gymnast ever, capturing her fourth gold of the games with a showstopping performance in the floor exercise.

The 19-year-old American on Tuesday completed an extraordinary stretch that included a team gold for the “Final Five” as well as individual golds in the all-around and vault and bronze on balance beam.

Her five medals tie the most for an American woman in a single Olympics and her four golds tie an Olympic record shared by three others.

Biles embraced longtime coach Aimee Boorman shortly after her routine, which includes a tumbling pass named in her honor and a Brazilian-themed segment intended to play to the crowd in Rio. She beamed when her score of 15.966 was posted.

Teammate Aly Raisman followed with a 15.500 silver-medal performance to give her a third medal during Rio and six overall in her Olympic career.