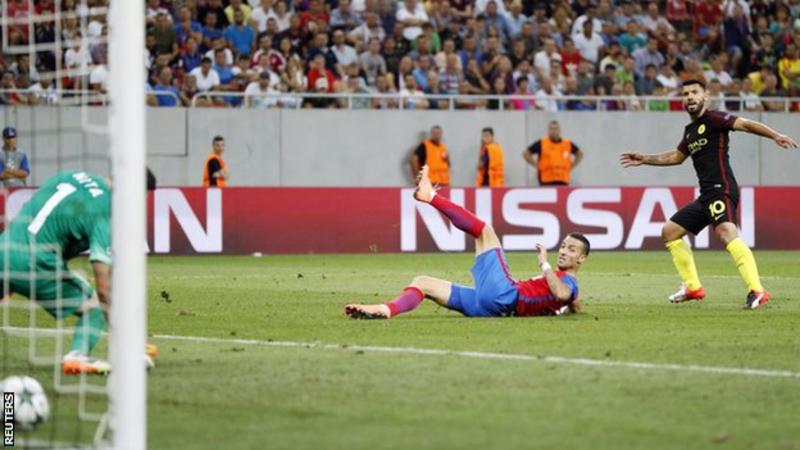 Aguero scored one of his goals

Aguero also missed two penalties – the first saved and second powered over – either side of David Silva’s opener.

Striker Aguero stroked in his first goal to make it 2-0 and added two more after Nolito scored City’s third.

The second leg is in Manchester on Wednesday, 24 August, with the winners reaching the group stage.

In the end, it was a satisfying night for Argentine front man Aguero after two missed spot-kicks in the first half. All three goals he scored were different from each other.

City were in total control of the match and outclassed their Romanian opponents.

Goalkeeper Joe Hart was dropped once again, with boss Pep Guardiola preferring to start with Willy Caballero. But, despite having to rush off his line in the early stages to clear the ball, the Argentine was a spectator for the remainder of the game.

The plane carrying City staff to Romania was evacuated after smoke was seen in the cabin, but there was no scare for the players on the pitch and it will need a calamitous collapse in the second leg to stop them from advancing.