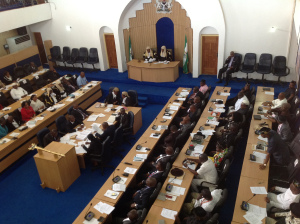 The Niger House of Assembly, on Tuesday, passed a motion, urging Gov. Sani Bello to set up a judicial commission of inquiry to determine the causes of the recent army/civilian clash in the state.

The motion was moved by Mr. Malik Bosso (APC-Bosso) under matters of urgent public importance.

“This unfortunate incident needs to be investigated and the situation if not handled properly , could lead to further destruction of lives and property.

“Both parties are still under pains and tension and so if no positive action is taken by the government, there would be dire consequences,” Bosso said.

Mr. Bello Ahmad (PDP-Agwarra), said the action of the military was inconsistent with Section 218 sub-section 1 of the constitution.

“It is the president that has the power to determine the operational use of the Armed Forces of the Federation and there was no such directive,” he added.

The house also called for immediate release of those injured and being held in prison custody in connection with the face-off‎ to enable them access medical care.

A recent clash between the army and natives of Koppa, Lunko, Tachi-Akpa, Pmakapi, Legbe and Dabma villages in Bosso Local Government Area of Niger, led to several deaths of soldiers and civilians.