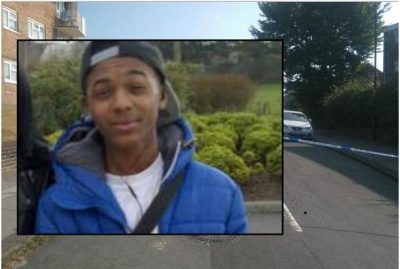 
Parents of Andre Aderemi, a Nigerian teenager who was brutally macheted 20 times after being pursued by three others carrying machetes, at Monks Hills estate, Selsdon, Croydon, have pleaded for an end to the cycle of violence on the capital’s streets.

The 19-year old boy later succumbed to his injuries in the hospital and died.

The stabbings may be gang related because many of those he fraternised with have been killed in a similar fashion.

Andre was friends with Myron Isaac Yarde, a 17-year-old rapper who was fatally stabbed in New Cross in April,

Aderemi was an ex-pupil at John Ruskin College in Croydon, and an amateur rapper said to be friends with two other young musicians stabbed to death in south London in the past three months.

He is also said to have performed with 16-year-old Leoandro Osemeke, known as Showkey, stabbed to death outside a party in Peckham on August 5.

An eye witness, Rebecca Shaw, 18, said she heard “screams” after the terrifying attack in Selsdon, Croydon.

She said: “Andre’s mother came running down the road. He was on the floor screaming out for her. I heard the screams and lots of people came running to him. They tried to give him CPR and put pressure on the wounds.”

And another onlooker added:
“I saw Andre running for his life and three others were coming up behind him. They were just chasing him and not shouting. They chased him behind a row of shops. I called the police, as I knew if they got to him he’d be done. They were armed with machetes about a foot long. I was told Andre was stabbed 20 times.”

More than 100 friends and relatives of Andre Aderemi, 19, last night gathered for a memorial church service on the Croydon estate where he was murdered on Tuesday.

His mother Yemi Hughes told the congregation: “I’ve lost my baby. He’s my everything, my rock… my other two boys are broken.”

Tragic Andre is the eighth teenager to be stabbed to death in London this year.