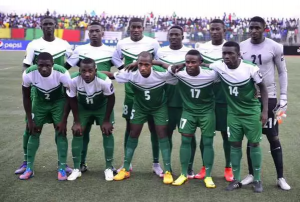 The Nigeria Football Federation (NFF) has congratulated the U23 National Team for winning bronze at this year’s Men’s Olympic Football Tournament in Brazil, after edging Honduras 3-2 in Belo Horizonte on Saturday.

A brace from Sadiq Umar and another goal from Aminu Umar proved decisive against a die-hard Honduran side who reduced the deficit through Antony Lozano and Marcelo Perreira.

A statement from the NFF President, Amaju Pinnick posted on the NFF website said that the victory of the U-23 was well deserved.

Meanwhile, the NFF has blasted former goalkeeper Peterside Idah for a mischievous post on his tweeter handle before the match, suggesting the Federation wanted to ‘hijack’ the donation to the team by Japanese plastic surgeon, Dr Katsuya Takasu.

According to a statement by the NFF President, Amaju Pinnick posted on the NFF website, “His message was a lie, an atrocious false alarm before an important match.

“I had exchanged correspondence with the Honourable Minister on the issue of the donation and we agreed that there was need for caution.

“The minister said to me that he read the donation in the papers and had expressed serious concern. I also received a mail from the NFF Integrity Officer who expressed very serious concern with this kind of donation.

“I got in touch with the Ambassador of Nigeria to Brazil and the Honourable Minister to say that whatever had to be done should be done after the bronze medal match to avoid any distractions.

“The NFF may be having financial challenges, but I assure you nobody in the Federation is interested in that money.

“If we get the government’s go-ahead to collect the money, no official of the NFF will be involved even in the collection.

“The money will be received directly by the team,” Pinnick was quoted as saying.