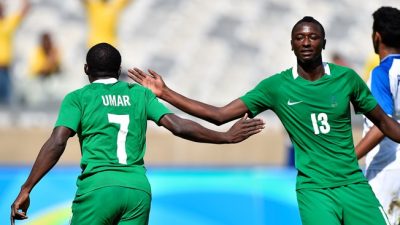 Nigerian players congratulated each other after the victory

Nigerians have hailed the national U-23 team, Dream Team VI, for consoling them with its 3-2 win over Hunduras to secure the football bronze medal of the ongoing Rio Olympic Games in Brazil.

On the whole, Nigerians are happy that they recorded the country’s name on the Games medals log else it would have been a shame shameful outing for Nigeria, the fans said.

Christian Chukwu, a former coach of the Super Eagles, told NAN that the team’s good performance gave them the desired victory against Hunduras.

“They exhibited the desire to win. I’m glad that they played as a team and played a coordinated game to win the bronze medal.

“They also listened to their handlers and that was why they were able to create good chances and scored goals.

“If only they played this way against the Germans in the semi-finals, we would have gone home with the silver medal at worst.

“But the game wasn’t that easy for the boys in the second half, they lost concentration, hence the goals against them.

“I am happy that we came and won at least a medal in the Olympics though it was a poor outing for Team Nigeria.

“I hope that in Japan 2020, we will have to put our acts together for a better outing,’’ Chukwu said.

Bright Omokara, a former Super Eagles player, commended the team for etching the country name in the medals table at the Rio Olympics.

Omokara said the players had redeemed the image of the country through football at the Olympics by winning a bronze medal.

“It would have been a shame if we failed to win any medal in Brazil, but thanks to the Dream Team VI for registering the country on the Games’ medal log.

“In spite of all they went through before and during the Games, they were able to take the third position,’’ he said.

Falade Oyekan, board member of the Lagos State Football Association, lauded the players for their feat at the Olympics.

Oyekan said the players should not to be discouraged when called-up to represent the country due to the challenges they encounter before and during the competition.