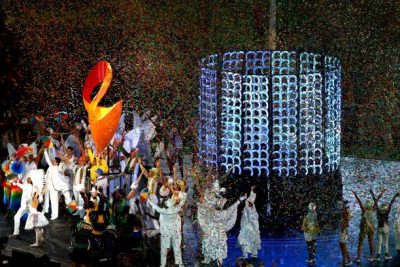 The Rio Olympics ended on Sunday with a spectacular carnival-inspired closing ceremony, ushering in the official handover to 2020 hosts Tokyo.

Among the highlights were Tokyo’s impressive showcase and a vibrant carnival parade.

“These were a marvellous Olympics, in a marvellous city,” Thomas Bach, the International Olympic Committee (IOC) President, said.

“Over the last 16 days, a united Brazil inspired the world, in difficult times for all of us, with its irresistible joy for life.”

Bach officially closed the Games of the 31st Olympiad after 16 days of competition, featuring 11,303 athletes from 206 nations and a refugee team.

One of the biggest cheers of the night came when Japan’s Prime Minister Shinzo Abe appeared dressed as computer game character Super Mario.

He rose out of a huge green pipe in the stadium.

The ceremony, watched by billions around the world, featured the parade of athletes and a dramatic extinguishing of the Olympic flame.

Great Britain, who finished the Games with 67 medals, were second as they recorded their highest tally at an overseas Olympics, made up of 27 gold, 23 silver and 17 bronze.

Russia, in spite of all the controversy about their doping scandal which led their contingent being reduced, were fourth with 19 gold, 18 silver and 19 bronze to total 56 medals.

In fifth place were Germany with a total of 42 medals, comprising 17 gold, 10 silver and 15 bronze.

South Korea was in eighth place with 21 medals made up of 9 gold, 3 silver and 9 bronze.

Hosts Brazil were placed 13th with 19 medals made up of 7 gold, 6 silver and 6 bronze, while Nigeria was joint 78th with one bronze medal.

Kenya had the best African performance, however, hauling 13 medals to finish 15th with 6 gold, 6 silver and 1 bronze.

The closing ceremony featured the symbolic handover of the Olympic flag.

Rio mayor Eduardo Paes returned it to IOC president Bach before it was passed to Tokyo governor Yuriko Koike.

That was followed by an impressive 12-minute showcase of Tokyo, which included Prime Minister Abe’s star turn.

IOC President Bach, in his speech, warmly thanked hosts Brazil, saying “we love you. Thank you for your warm hospitality.

“You gave many reasons to be proud. These Games demonstrated that diversity is an enrichment for everyone. These Games were a celebration of diversity.

“They are leaving a unique legacy for many generations to come. History will talk about a Rio before and a much better Rio after these Games.’’

“But it was a challenge with success. I am proud of my country, my city and my people. Rio has delivered history.”

The Games had many unique moments, with Jamaican sprinter Usain Bolt saying goodbye to the Olympics by winning an unprecedented “triple triple”.

The 30-year-old Jamaican won his seventh, eighth and ninth gold medals by claiming the 100m, 200m and 4x100m relay titles for the third Games in succession.

U.S. swimmer Michael Phelps, meanwhile, took his medal tally to 28 from five Olympics by winning six in Rio – five of which were gold medals.

The 31-year-old’s efforts helped the US top the medal table with 121, their most successful “away’’ Games.

In doing so he became one of the faces of Rio 2016 — as did US gymnast Simone Biles, with the 19-year-old winning four gold medals.

U.S. swimming looks in good health if Phelps retires, with the emergence of Katie Ledecky, another 19-year-old, winning four gold and a silver in the pool.

The Rio Games brought first medals for Fiji, Jordan and Kosovo- and all three opened their accounts with gold, Fiji in the first Olympic rugby sevens competition.

And they finished on a high as the men’s volleyball team beat Italy for gold on the closing day of the Games.

But none of their medals got a bigger reception than when Neymar scored the winning kick in the penalty shootout as Brazil beat Germany in men’s football final.

It was their first men’s Olympic football gold medal.

It came in front of 78,000 fans in the Maracana, two years after Germany thrashed hosts Brazil 7-1 in the 2014 World Cup semi-finals.

But the build-up to the Games was dominated by a Russian doping scandal, fears over the Zika virus and issues with the city’s security, infrastructure and venues.

The Games were not affected by any major incidents, but they did not pass without some hitches, with the diving pool turning green and scores of empty seats at venues.

Controversial decisions marred the boxing tournament, while there were security problems, including a bullet shot into the media tent at the equestrian venue and a media bus being attacked.

The layout of the cycling road race course was also criticised, while Russian swimmer Yuliya Efimova, who had been banned for doping, was repeatedly booed.

However, the biggest embarrassment perhaps was felt by U.S. swimmer Ryan Lochte.

The gold medallist apologised to the people of Brazil after “over-exaggerating’’ claims he and three team-mates were robbed at gunpoint in Rio.

Another highlight of Rio was the story of the refugee team.

The IOC had announced in June that a group of 10 refugee athletes would compete in an Olympic Games for the first time.

The team of swimmers, judokas and runners competed under the flag of the IOC.

“We are equal now,” said marathon runner Yonas Kinde, who is originally from Ethiopia.

But some of the Games’ emotional moments were highlighted by the fair play awards to U.S’s Abbey D’Agostino and New Zealand’s Nikki Hamblin.

They were given fair play awards after stopping to help each other during their 5,000m semi-final.