Members of #BringBackOurGirls marching to Aso Rock before they were stopped

An attempt by the members of the #BringBackOurGirls group to march to Aso Rock was halted on Monday by a combined force of policemen and officials of the Department of State Security (DSS).

The marchers who had planned to march to Aso Rock and deliver a message to President Muhammadu Buhari to act swiftly to save the more than 200 Chibok schoolgirls abducted by Boko Haram in 2014 and believed to be hidden in Sambisa Forest, were halted at the Independence Avenue Abuja.

The group which had declared a 14-day line up of activities to make the Buhari administration act quickly to rescue the girls, sat on the road and played protest music after the police stopped them. 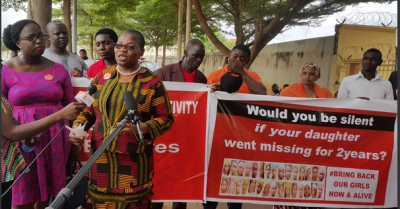