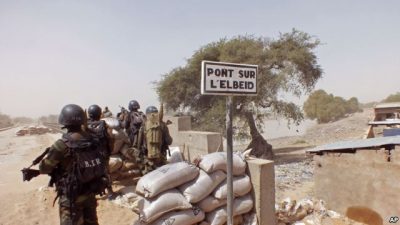 A suicide bomber on a motorbike killed three people and wounded 24 at a market in north Cameroon, where armed group Boko Haram has been waging an armed rebellion since 2009, authorities said.

A senior military official told Reuters news agency that the bomber was also killed in the attack in Mora, in Cameroon’s Far North province.

He said that it was possible one of the three victims was also on the motorbike. Another security source said authorities were convinced that the attack was the work of Boko Haram, which has pledged allegiance to the Islamic State of Iraq and the Levant (ISIL) and wants to create an Islamic state in a region spanning four countries.

A regional offensive against Boko Haram led by Nigeria, Chad, Cameroon and Niger – the four countries most affected by the armed group – has chased fighters out of towns in the Lake Chad region.

“There were also six people seriously wounded who were transported out by helicopter to Maroua.”

He said that “the situation is currently under control”.

Cameroon has been hit frequently by suicide attacks.

Boko Haram pledged its allegiance to ISIL, also known as ISIS, last year but the groups have apparently split, with ISIL naming Abu Musab al-Barnawi three weeks ago as the group’s leader for West Africa in a two-page interview in its weekly magazine, Al Nabaa.

In the interview, Barnawi said he is planning to bomb churches and kill Christians while ending attacks on mosques and markets used by Muslims.

The interview with Barnawi indicated a major shift in strategy for the fighters, who have killed many more Muslims than Christians in attacks on mosques with suicide bombers and armed men.

Boko Haram’s previous figurehead, Abubakar Shekau, or someone claiming to be him, rejected Barnawi’s appointment.

“People should know we are still around,” Shekau said in a 10-minute message after Barnawi’s appointment earlier this month.

In March 2015, Shekau switched allegiance from al-Qaeda and declared that Boko Haram should be known as the ISIL’s West Africa Province.

At the time, Boko Haram was the most powerful military force in northeast Nigeria, controlling a huge area and was better equipped and motivated than Nigerian forces.

Under Shekau, Boko Haram’s seven-year campaign spread to neighbouring countries, killed more than 20,000 people and drove more than 2.2 million from their homes.

The movement created what aid workers are calling a catastrophic humanitarian emergency with children dying of starvation daily.